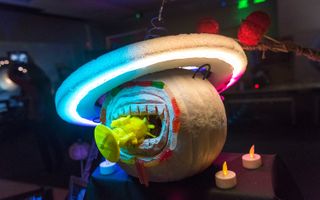 NASA's Jet Propulsion Laboratory (JPL) in Pasadena, California — the agency's go-to center for robotic planetary exploration — held its seventh annual pumpkin-carving contest this week, and the results were as impressive as you might imagine.

One contestant's pumpkin was styled as Saturn gobbling up a spacecraft — a clear homage to NASA's Cassini mission, which ended more than 13 years of groundbreaking work in the Saturn system last September with an intentional death dive into the ringed planet's thick atmosphere. [More Photos of NASA's 2018 Space Pumpkin Carving Contest!]

Another, even more elaborate design focused on NASA's plans to study Jupiter's moon Europa, which harbors an ocean of liquid water under its icy shell. The agency is developing a $2 billion mission called Europa Clipper, which is scheduled to launch in the early 2020s. Clipper will orbit Jupiter and investigate Europa up close over dozens of flybys, assessing the moon's habitability and scouting out touchdown locations for a future drill-equipped, life-hunting lander.

The JPL Halloween tribute featured a pumpkin-based clipper ship on Europa's presumably craggy surface. The clipper — the winner of last year's carving contest — has been run through by a rotating drill sported by a sample-snagging pumpkin submarine, which is saying (via word bubble), "All these worlds are yours — except Europa!! Attempt no landing here!"

This quote is a reference to Arthur C. Clarke's famous "Space Odyssey" series of sci-fi novels, in which an exploration ship receives that mysterious warning (a very similarly worded version of it, anyway).

There were many more entries, some of which boasted movement and mechanization. You can get an eyeful in this JPL Flickr gallery, which also features some videos.

Editor's note: If you've got a great space-related Halloween costume you'd like to share with Space.com for a story or gallery, send images and comments to managing editor Tariq Malik at spacephotos@space.com.