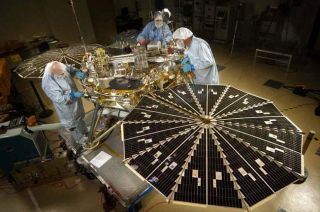 The secondof the remaining five planned adjustments prior to landing is scheduled formid-October.

Following adifficult landing in the northernicy reaches of the red planet, Phoenix will unfurl a digging robotic arm totest the icy Martian soil for habitable conditions for microbial life.

So far,mission managers said, all is well.

Over thenext month, the $420 million spacecraft's support team will check itsscientific instruments, radar and the communication system needed duringand after the soil-sampler's landing. When it does land, Phoenix principalinvestigator Peter Smith said it will be a milestone in space exploration.