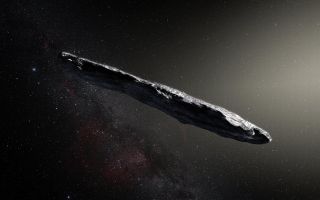 A year ago, astronomers spotted a strange object barreling through our solar system on a very weird path — the first discovery of an interstellar object, now called 'Oumuamua, which means "messenger from afar" in Hawaiian.

During the abrupt flyby, scientists made frantic observations of the object before it passed out of range of even the most-powerful telescopes. Ever since then, 'Oumuamua has provided scientists a seemingly endless supply of questions, with most answers still very much up in the air.

Astronomers got their first glimpse of 'Oumuamua on Oct. 19, 2017, through the Pan-STARRS1 telescope based in Hawaii, which is fine-tuned to catch temporary phenomena like passing comets. Right away, scientists knew this wasn't your average comet; its path was way too strange. They'd caught sight of the object on its way out of our solar system, so scientists are still trying to figure out where its journey began. ['Oumuamua: The Solar System's 1st Interstellar Visitor Explained in Photos]

'Oumuamua has also endured a bit of an identity crisis during its first year in the scientific literature. At first, astronomers thought it was a comet. Then, they realized there was no cloud of gas and dust enveloping the object, so they reclassified it as an asteroid. But that proved problematic when they realized it was moving faster than an asteroid ought to be, as if getting a little boost of speed from volatile materials evaporating off its surface, like those that form a comet's surrounding cloud.

Another puzzle is the object's strange shape: long and thin, something like six times longer than it is wide. That's unlike most cosmic objects, which are generally lumps. It's also spinning strangely, tumbling end over end like a stick tossed for a cosmic dog. Some of the hypotheses to explain that elongated shape are that 'Oumuamua had a messy run-in with an asteroid or that the incredible gravitational pull of a giant planet stretched the object.

Because they can't gather any more data about 'Oumuamua, scientists have turned their attention to spotting another such interstellar visitor, hoping to find one sooner rather than later. (Researchers have said the objects should be pretty common, and scientists had in fact been waiting for a flyby like 'Oumuamua's for decades.)

But regardless of the mysteries scientists may never be able to solve with the observations they did gather in time, one thing about 'Oumuamua is nearly certain: It's not an alien spaceship broadcasting back to its creators. Yes, they checked.