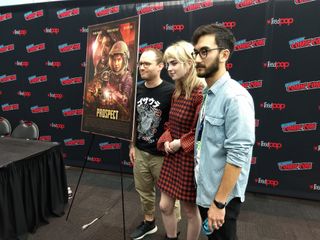 The directors and star of Prospect gather for a press panel at New York Comic Con 2018.
(Image: © Marshall Honorof/Space.com)

However, that's not a problem for "Prospect": an indie darling sci-fi film, inspired by the rough, dirty, dangerous worlds of classics like "Alien" (1979), "Dune" (1984) and even the original "Star Wars" (1977). The production won the prestigious Adam Yauch Hörnblowér Award at South by Southwest 2018, and is scheduled for a wide release in Regal cinemas on Nov. 2. At New York Comic Con 2018, the film's co-directors, Zeek Earl and Chris Caldwell, joined star Sophie Thatcher to discuss the movie in a private press room.

The setup is deceptively simple: Damon (Jay Duplass) and Cee (Sophie Thatcher) are a father-and-daughter prospecting team in the far future. They travel to a planet with a toxic atmosphere to mine rare stones, where they encounter Ezra (Pedro Pascal), a potentially dangerous competitor. The twist: Because of the poisonous dust in the air, every character has to spend nearly the entire film in a bulky environmental suit. [Biggest Space Movies to Watch in 2018]

The overall feeling is a little claustrophobic, a little uncomfortable and more than a little reminiscent of high-intensity classics like "Planet of the Apes" (1968), "THX 1138" (1971) or even "Mad Max" (1979). In order to achieve this feeling, the panelists said, the most important thing was to employ practical effects.

"It's inspired by classic sci-fi films, like 'Star Wars' and 'Alien,' that aren't in front of a green screen," Caldwell said. "Aesthetically, a lot of it is based on the classics: 'Star Wars,' 'Alien,' 'Blade Runner.' But we are very excited and hopeful to be participating in this more intellectual science-fiction. One of the things that we were really striving to do with the film was to capture this feeling where you don't hold the viewer's hand."

Color palette also played a big role in making the world feel lived-in and worn-down. Grays, browns and blacks were the order of the day, mimicking the aesthetic of early space exploration.

"We looked at a lot of the original Hasselblad photography from the early Apollo missions to try to get that texture," Caldwell said. "It's a very digital movie, but we wanted to pull in some of that retro texture. We also had 'the blue rule.' For the most part, only Sophie's suit was allowed to have a strong blue presence. We tried to take that out of the rest of the film."

Thatcher was impressed with the film's story right from the get-go. In fact, it's what inspired her to sign on.

"Reading the script, that's what drew me in," she said. "[Cee] starts off as more timid. As she grows and is forced to be with Ezra, she starts standing up for herself and speaking for herself."

Pascal — who, unfortunately, could not attend NYCC this year — felt the same way.

"[Pascal] really connected with the script, really liked the language," Earl said. "He loved that challenge to take on.

"That guy is so stupid talented," Earl added. "He surprised us on a continual basis. He's hilarious. He's getting cast in all this big action stuff, but at any point, if he wants to do comedy, he'd have the entire crew cracking up."

"Jay Duplass is such a pro," Earl said, relating a story of how Duplass stopped him in the middle of a difficult shoot and insisted that a dehydrated Earl get some more water before continuing. "He was a mentor on set. He connected with the DIY spirit of the whole thing."

Sci-fi on a shoestring budget

Most indie films don't have a ton of money to work with, and Prospect was no exception. In order to create a credible sci-fi world, the trick was to start writing with a small budget in mind — not to imagine something grand, then cut the production down to the bone.

"We had to prove to financiers that this wasn't just a stupid idea," Earl said. "Just like we rewrote the script four times, we rewrote the budget 10 times." Even the movie's signature toxic dust didn't cost much to make; Earl shot it in his own dusty basement, and edited it into almost every other scene in the film.

"This movie is built to be inexpensive," he continued. "It's not like we were taking some story and figuring out how to do it cheap. We were thinking while we were writing about what the implications are on set. It was designed to be that way," Earl said.

"I would encourage people who are trying to get their first feature of the ground to be thinking financially as well, to be strategic in your development," Caldwell said. "Because everything is interconnected. The way that we got a shot to [make a movie] like this was that it was inexpensive."

The movie's filmic inspirations are easy enough to guess, but Earl and Caldwell also drew on their favorite books to develop the world of "Prospect."

"My favorite growing up was 'Dune,'" Earl said.

"I've been digging into 'Foundation' recently, just because it's relevant to some of the ideas we're trying to play with," Caldwell said.

As for the 17-year-old Thatcher, she said that when she was cast, she wasn't familiar with the sci-fi inspirations that delighted her co-directors. But they managed to bond over other films that feature bold women in otherworldly situations.

"The first time I met Zeek and Chris, we drew connections through Miyazaki movies with young female protagonists. I grew up on those films. That was my inspiration for [Cee]." She also cited Carey Mulligan and Michelle Williams, whose acting styles she hopes to emulate.

One journalist asked Thatcher if it was possible that someday in the future, someone might cosplay Cee at an event like NYCC — and if so, what she would think of it.

Her response was both straightforward and hopeful: "I will be flattered!"