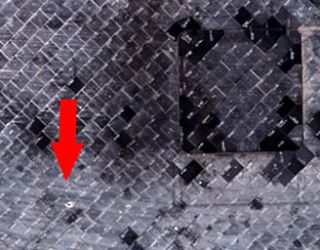 A view of damage to heat-resistant tiles on the underside of the space shuttle Endeavour, 4 feet (1.2 meters) behind the starboard wheel cover. Mission managers are concerned the damage may pose a risk to the shuttle's STS-118 crew during reentry.
(Image: © NASA)

"Yesterdaywe were thinking it might be foam, today that radar data said it looked likeice," Shannon said. "That perked up our ears a little bit because iceis much more dense, of course, than foam and can do much more damage to tile."

MissionControl notified the STS-118 astronaut crew of the need for an inspectionshortly after the briefing here at Johnson Space Center (JSC).

Theastronauts, who are now docked with the International Space Station (ISS), willuse a 50-foot (15-meter) sensor-tipped extension boom to Endeavour's roboticarm to get a closer look at the damaged area on Sunday around 12:06 p.m. EDT(1606 GMT).

Images ofthe orbiter's thermal shield revealed damage to a six-by-six-inch(15-centimeter-by-15-centimeter) heat-resistant tile, located four feet (1.2meters) behind the starboard side's retractable wheel cover. Shannon describedthe damage as a three-inch-by-three-inch (eight-centimeter-by-eight-centimeter)gouge, but noted that mission engineers will not be able to determine the fullextent of the damage until after the crew's closer inspection.

"Wehave a rich flight history of tile damage, some of which is more significantlooking than what we have right here," Shannon said. "Instead ofguessing, we'll go and get the right characterization of what exactly thedamage is."

If debrispenetrates deep enough into the heat-resistant tile, the orbiter's thinaluminum skin could be compromised from the heat and pose a threat to the crewon board. If that is the case with Endeavour's damage, Shannon said, there isrecourse.

"We havethree different ways that we can fix tile that we feel very confident in," Shannon said. Although he said it's too soon to know if repair is evennecessary, astronauts could use a heat-resistant paint, a drill-on patch or athick "goop" as a temporary fix.

NASA haspaid close attention to the integrity of its shuttle heat shields since 2003,when a 1.67-pound (757-gram) chunk of foam insulation struck the Columbiaorbiter's heat shield during liftoff and led to the loss of its seven-astronautcrew.

In additionto the tile damage, STS-118 mission managers said there was a close encounter witha spent rocket occurred about one and a half hours after the 6:36 p.m. EDT(2036 GMT) launch of Endeavour.

MattAbbott, lead shuttle flight director for the current mission, said theencounter was surprising but didn't require an emergency maneuver to avoidhitting the object.

"Thereare times when really doing nothing is the right thing to do," Abbot said."We do everything we can to make sure that the vehicle is protected."

In thiscase, the 32-year-old Delta 2 rocket came within one to two kilometers (0.6miles to 1.2 miles), which Abbott said did not pose an immediate danger toEndeavour's crew.

Thehand-off will prepare Mastracchio and Canadian astronaut Dave Williams for theirspacewalk tomorrow at 12:31 p.m. EDT (1631 GMT), which will attach thetruss to the orbital laboratory.

Teacher-astronaut BarbaraMorgan is spending her first days in space on the mission, ending a 22-yearwait for the opportunity after the crew of the 1986 Challenger mission. Shereturned to NASA as a full fledged astronaut in 1998 and was assigned toEndeavour's STS-118 mission in 2002.