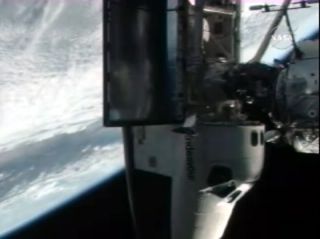 This view, taken by a exterior camera aboard the International Space Station, shows the space shuttle Endeavour docked at the tip of the U.S. Destiny module on Aug. 10, 2007.
(Image: © NASA TV.)

The dockingmarked the orbital arrival for teacher-astronautBarbara Morgan, who helped prime Endeavour's docking ring for connectionwith the ISS. Morgan's flight comes 22 years after she was first selected asNASA's backup Teacher in Space in 1985.

Endeavour'sFriday ISS arrival came after a two-day cruise that began with a Wednesdaylaunch from NASA's Kennedy Space Center (KSC) in Florida. Kelly took the100-ton orbiter's helm, guiding it within nine miles (14 kilometers) of thespace station by firing a correctional burn of propellant.

"We'rewaitin' for ya," ISScrewmember Clay Anderson radioed to Kelly shortly after the maneuver.

WhenEndeavour arrived 625 feet (191 meters) below the orbital laboratory, Kellyfired small thrusters on the spacecraft, rotating the shuttle in place toexpose its black underbelly to the ISS crew. Midway through the zero-gravity somersault, thestation's Expedition 15 astronauts snapped photographs of the shuttle'sheat-resistant tiles for relay down to Earth.

After theorbital acrobatics, Kelly swung Endeavour up to the forward part of the spacestation to dock in front of its U.S. Destiny laboratory.

Not longafter the two astronaut crews meet, however, astronauts began preparing for atleast seven busy work days in space--but could tack on three days to the mission.

Thepossible extension hinges on tonight's 5:51 p.m. EDT (2151 GMT) test of the Station-to-ShuttlePower Transfer System (SSPTS). The new device is designed to allowEndeavour to draw on the space station's solar power grid and conserve its fuelcell resources. Mission managers here at Johnson Space Center (JSC) will decideSunday whether or not to extend the mission.

Despite thepotential for more time in space, however, shuttle astronauts Tracy Caldwelland Rick Mastracchiowasted no time preparing the station's new Starboard 5 (S5) spacer truss fordelivery. The two will hand off the 4,000-pound (1,814-kilogram) hunk of spacestation, affectionately known as "Stubby," to the ISS' robotic armlater today.

"TheS5 truss is just one of many things that need to be done," Morgan said ina NASA interview. "We hit the ground, or we hit the space, running, and wedon't stop until we land."

Once thetruss is in position, STS-118 mission specialist Dave Williams and Mastracchio will beprimed for theirfirst spacewalk tomorrow. The busy rush of post-docking isn't a newexperience for some of the STS-118 astronauts.

"WhenI was onboard the space station it was only three modules last time. Nobody wasliving there and it was nice and clean, so I expect it to be just as clean aswhen I left it," Mastracchiosaid jokingly in a preflight interview.