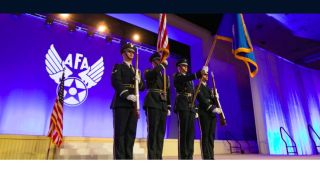 WASHINGTON — The Air Force Association is taking a strong position against the proposed establishment of a Space as a separate branch of the U.S. military, arguing that it would do "more harm than good." It suggests a more reasonable compromise would be to combine Air Force and Space Force into a "U.S. Aerospace Force."

"The U.S. Air Force has led the armed forces in establishing America's space capability such that it is unrivaled in the world," the association says in a position paper. "Today, to split up the well-integrated set of air and space capabilities that have been organized to seamlessly contribute to America's military capabilities would result in more harm than good."

The basic argument laid out by AFA is that while there might be a need for a Space Force , now is not the time to break up the Air Force. "The question of standing up a new armed service for space is not 'if,' but 'when,' and the 'when is the time all the conditions for creating a separate armed force for space are met."

The association supports some elements of the Trump administration's and the Defense Department's proposed actions such as the standup of a combatant command, U.S. Space Command. "Rapidly reducing U.S. space capability gaps, while re-establishing U.S. Space Command, is the best way to address advancing threats to space."

But creating a separate service would be damaging, the association contends. "From an employment perspective, effects from air and space have been integrated and are indivisible. The U.S. Air Force may want to reflect this reality so it is better understood by Americans by considering renaming the U.S. Air Force to the U.S. Aerospace Force."

AFA agrees with other Space Force critics that the cost of a separate service is an unnecessary burden at a time when military budgets are strained. "The Space Force proposal is a resource question writ large," the position paper says. "Too much mission, too few dollars. Standing up a separate space bureaucracy amplifies the problem by driving more money to a headquarters function, not space operations. Congress has constrained space capabilities, not the Air Force, by underfunding the service."

Before Congress debates this issue, more questions need to be answered about U.S. military space policy and posture, AFA says. "Currently there are no space arms which are fundamental to setting up an armed service. Constraints to fully-weaponized space capability must be debated and changed by Congress to allow the Air Force to mature space warfare theory and concepts of operation for war in, from, and through space."

AFA points out that the U.S. Air Force is the "steward" of key space capabilities that support the U.S. military, its allies and the nation's economy. "As Air Force Chief of Staff Thomas D. White said in 1958, 'Air and space are not two separate media to be divided by a line and to be readily separated into two distinct categories; they are in truth a single indivisible field of operations.'"