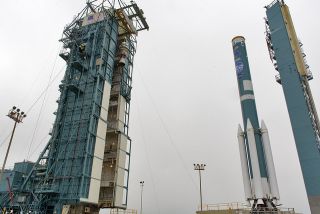 The second stage of ICESat-2's rocket is lifted onto the booster on the right in June 2018.
(Image: © NASA/Randy Beaudoin)

One of the most storied rockets in history is making its last journey tomorrow morning (Sept. 15), in a launch you won't want to miss.

That rocket, United Launch Alliance's last Delta II booster, has been in use for almost three decades, with 154 successful flights to its name. On its last launch, it will carry NASA's new, incredibly precise space laser on the Ice, Cloud and Land Elevation Satellite-2 mission (ICESat-2 for short).

The mission will take off from Vandenberg Air Force Base in California during a launch window opening at 8:46 a.m. EDT (1246 GMT; 5:46 a.m. local California time). The window will remain open for about 2.5 hours. You can watch the launch live here, courtesy of NASA TV. The webcast will begin at 8:10 a.m. EDT (1210 GMT).

As of a NASA news conference held yesterday (Sept. 13), meteorologists were predicting a 100 percent chance of favorable weather for the launch both tomorrow morning and during the backup launch window on Sunday morning. However, given the area's propensity for fog, it's unlikely nearby residents will be able to see the launch.

The ICESat-2 mission, which cost a little over $1 billion, is scheduled to last for three years, although the spacecraft carries enough fuel to last at least seven years, and potentially as many as 10, should NASA decide to extend its mission.

The only instrument on board is a laser that produces six beams of bright green light, then catches the beams as they bounce back to the spacecraft. The instrument times that round-trip journey to the nearest billionth of a second, allowing scientists to produce an incredibly accurate measurement of the surface of Earth near the poles. Every 91 days, it retraces its path, so scientists can track seasonal changes to the ice.

Tomorrow's launch isn't just about a cutting-edge tool that will take incredibly detailed measurements of the thickness of ice around the globe. It's also a milestone in space history, given the long career of the Delta II rocket.

"We also just want people to understand that this is just an exciting adventure in its own right," Tom Wagner, program scientist for the mission at NASA, said during the news conference yesterday. "Hundreds of people came together to develop one of the most amazing machines we've ever launched into space."