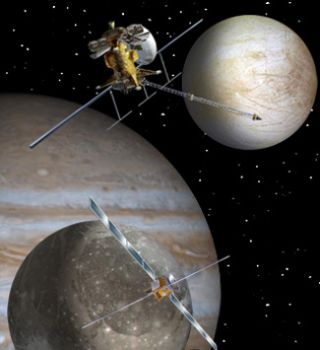 An artist concept of proposed mission to the Jupiter system, the Europa Jupiter System Mission could launch in 2020.
(Image: © NASA.)

NASA andthe European Space Agency (ESA) are pushing ahead with proposals to sendambitious new missions to explore Jupiter, Saturn and the many moons thatcircle both planets, the two space agencies announced Wednesday.

The proposedmissions call for sending multiple spacecraft tothe Jupiter and Saturn systems to explore the gas giant planets and theirunique satellites, such as Jupiter?s ice-covered Europa and Saturn?s shroudedmoon Titan.

?It?s justa remarkable effort that I see,? said Jim Green, director of NASA?s planetary sciencedivision, in a teleconference with reporters. ?The communities have really cometogether on both sides of the pond.?

NASA andESA officials announced plans for the flagship mission proposals and a roughschedule for the first to fly - the Jupiter-bound expedition - on Wednesday aftera meeting between the two space agencies in Washington, D.C., last week. NASA envisionslaunching its Jupiter and Saturn probes atop expendable Atlas 5 rockets, U.S.space agency officials said.

"Thedecision means a win, win situation for all parties involved," said EdWeiler, NASA?s associate administrator for science missions at the agency?sheadquarters in Washington, D.C. "Although the Jupiter system mission hasbeen chosen to proceed to an earlier flight opportunity, a Saturn systemmission clearly remains a high priority for the science community."

NASA wouldbuild one orbiter, the Jupiter Europa, while ESA would provide the other,Jupiter Ganymede. The spacecraft would launch in 2020 from different spaceportswith the goal of reaching Jupiter by 2026 and spending three years studying theplanet and its moons, NASA officials said.

NASA?sshare in the mission could cost up to $3 billion, while Europe has set asideabout 850 million euro (about $1 billion) for its next flagship mission.The European Jupiter probe is also known as Laplace at ESA. While neithermission is currently fully funded, NASA is setting aside about $10 million tocontinue studying design challenges for its Jupiter Europa orbiter, Green said.

NASA?s lastdedicated mission to Jupiter was Galileo, which spent eight years studying theplanet and its moons before intentionally plunging into the gas giant in 2003to end its flight. The next probe slated to fly to the planet is NASA?s Juno,which is scheduled for an August 2011 launch.

Jupiter?smoon Europa is covered with a thick crust of ice that hides what astronomersbelieve to be a vast liquid ocean beneath its frozen exterior. In addition to studyingJupiter itself and flying by its other large satellites, NASA?s Jupiter Europa spacecraftwould be able to orbit Europa and build global maps of the moon?s surface,topography and composition. A ground-penetrating radar and gravity-measuringsensors would also probe Europa?s interior to obtain definitive proof whetherthe underground ocean exists.

?We allfirmly believe that there?s an ocean under the ice of Europa,? Niebur said. ?Thismission is going to verify that using three different lines of inquiry.?

Europe?s Jovianprobe would mirror NASA?s in-depth scrutiny of Europa at Ganymede, which is the largestof Jupiter?s moons, as well as the largest natural satellite in the solar system. The moon is larger than the planet Mercury. While NASA?s spacecraft will end its mission inorbit around Europa, Europe?s would do so circling Ganymede, NASA officials said.

Like theproposed Jupiter mission, the Saturn expedition would consist of both NASA andEuropean spacecraft.

Dubbed the TitanSaturn System mission, the flagship flight would include a NASA-builtorbiter to study Saturn and its moons, as well as European lander and researchballoon to continue the exploration of the planet?s cloud-covered moon Titan.Saturn?s moon Enceladus, which harbors ice-spewinggeysers, is also major target for that mission. ESA officials havereferred to their mission to Saturn and Titan as Tandem.

Thedaunting technical hurdles involved in assembling the mission will require morestudy and technology development before the flight can go forward, NASAofficials said. Those hurdles, which include trying to keep spacecraft trimenough to fit on their rockets, led NASA and ESA officials to propose flying theJupiter mission first, they added.

Under NASA?scurrent plan, the Titan Saturn System mission would take about 10 1/2 years to reachSaturn if it launched in the 2020 timeframe. NASA?s orbiter would spend abouttwo years circling Saturn to study the planet, Enceladus and other moons, andthen spend about 1 1/2 years in orbit around Titan, Niebur said.

Niebur saidTitan?s major draw is its chemistry, which appears to have many parallels to whatthe early Earth may have been like in the ancient past. Images and data fromthe Cassini orbiter have found evidence of liquidmethane lakes and rain on the cloudy Saturnian moon.

?Titan isfelt to be a very Earth-like world in terms of the processes going on,? Niebursaid.

Meanwhile, the Cassini orbiter managed by NASA, ESA and the Italian SpaceAgency is currently in orbit around Saturn, where it has been studying theplanet and its many moons sinceit arrived in June 2004. The orbiter?s European-built Huygens landersuccessfully touched down on Titan?s surface in January 2005.

Missionmanagers are pushing to extend Cassini?s flight by seven years to 2017.

"Thisjoint endeavour is a wonderful new exploration challenge and will be a landmarkof 21st century planetary science," said David Southwood, ESA?s directorof science and robotic exploration. "What I am especially sure of is thatthe cooperation across the Atlantic that we have had so far and we see in thefuture, between America and Europe, NASA and ESA, and in our respective sciencecommunities is absolutely right. Let's get to work."