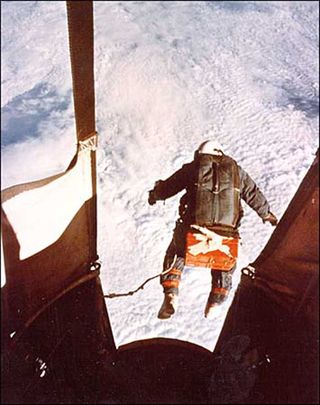 Can you imagine jumping from a plane or other vehicle atnear-orbital distances? You'd have to be crazy. Or maybe a science fictionwriter. The first person to think of the idea of space diving from near-orbitalaltitudes is arguably E.E. 'Doc'Smith, in his classic 1934 novel Triplanetary:

Getting back to the present, the space diving suit currentlyunder development by Orbital Outfitters is both an extreme sporting device andan emergency backup for returning from space.

One of the developers of the space diving suit, JonathanClark, is a former NASA flight surgeon with a somber reason for working on thesuit. His wife, astronaut Laurel Clark, was killed in when the space shuttle Columbia burned up in reentry.

The first space dive, from a height of sixty miles,would be attempted two years later (see an artist's rendering of the spacediving suit).