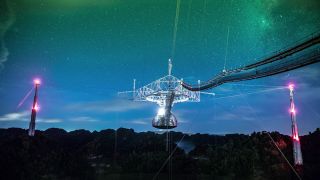 The Arecibo Observatory, which houses the second-largest radio telescope in the world, has received $5.8 million from the National Science Foundation to install a new supersensitive antenna called a "phased-array feed" that will boost the telescope's capabilities by 500 percent.
(Image: © Arecibo Observatory/NSF)

Puerto Rico's Arecibo Observatory (AO), the second-largest radio telescope in the world, is about to get a major upgrade.

Nearly one year after the 55-year-old observatory was damaged by Hurricane Maria — a storm that arrived during a funding crisis that nearly shut down the observatory — astronomers at Arecibo have something to celebrate. The National Science Foundation (NSF) just awarded $5.8 million in funding to add a new "supersensitive antenna" to the 1,000-foot (305 meters) telescope dish.

The new antenna, named the Advanced Cryogenic L-band Phased Array Camera for Arecibo (ALPACA), "will increase the telescope’s observation capabilities 500 percent," officials with the University of Central Florida, which took over management of the observatory in April, said in a statement. [The Arecibo Observatory: Puerto Rico's Giant Radio Telescope in Photos]

A team of scientists led by Brian Jeffs and Karl Warnick, two electrical engineering professors at Brigham Young University, will use the NSF award to design, build and mount ALPACA on the radio dish by 2022.

"We’re taking the most sensitive radio telescope in the world and opening it up so that it can view a larger part of the sky at one time," Warnick said in a statement from the University of Central Florida (UCF). "There’s a lot of things in space you can see with an optical camera, but you can see even more with a radio telescope."

While it is a single unit, the device will actually consist of 166 miniature antennas that work in unison to "increase the field of view of the telescope to 40 beams, providing much smoother and continuous coverage of the sky than conventional receivers," UCF officials said.

ALPACA will not replace the telescope's main 96-foot (29 meters) antenna, called the "line feed," which broke off during the hurricane. That antenna still hasn't been repaired, and it could take a couple of years before it's up and running again, Wired.com reported in June. Rather, ALPACA will be mounted on the telescope's focal point.

Arecibo was originally built to receive one radio wave at a time. Nine years ago, Jeffs and Warnick installed a similar array of small antennas to the radio telescope to boost its capability to seven beams.

"We already have one of the most powerful telescopes on the planet, and with this award we will be able to do even more," Francisco Cordova, director of the Arecibo Observatory, said in the statement.

The Arecibo Observatory is best known for its work with the Search for Extra Terrestrial Intelligence (SETI) Institute — and for its appearance in the 1995 James Bond film "GoldenEye." More recently, it has played an important role in the search for potentially dangerous asteroids.

"The receiver will accelerate research in gravitational waves, fast radio bursts, dark matter and pulsar surveys," UCF officials said, "ensuring that AO continues to be at the forefront of radio astronomy for years to come."