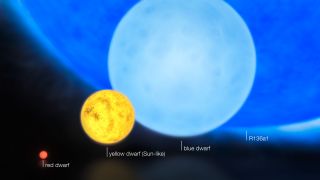 This artist's impression shows the relative sizes of young stars, from the smallest red dwarfs, weighing in at about 0.1 solar masses, through low-mass yellow dwarfs, such as the sun, to massive blue dwarf stars weighing eight times more than the sun, as well as the 300-solar-mass star named R136a1.
(Image: © European Southern Observatory)

The sun may be the most massive object in the solar system — it contains 99.8 percent of the mass of the entire system — but on a stellar scale, it's really quite average. About half of all known stars are more massive; about half have less mass. At the top end of the scale, the most massive known star in the sky is R136a1, a star more than 300 times as massive as our sun. And it's not alone in dwarfing Earth's dominant star.

RMC 136a1, usually abbreviated as R136a1, lies about 163,000 light-years from Earth in the Tarantula Nebula. This massive star lies outside our galaxy; it's part of the Large Magellanic Cloud, one of the Milky Way's satellite galaxies.

Astronomers working at the Radcliffe Observatory in South Africa first identified a star cluster in 1960, naming it RMC 136. When the Hubble Space Telescope examined the system, it found that the cluster was made up of more than 200 extremely bright stars; the most massive one was named RMC 136a1.

R136a1 has an estimated mass of 315 solar masses, where a solar mass is equal to the mass of the sun. (Its mass when discovered was estimated at 265 solar masses, but further observations in 2016 with NASA's Hubble Space Telescope refined the original measurements.) Although this makes it the most massive known star, it was once even larger.

"Unlike humans, these stars are born heavy and lose weight as they age," Paul Crowther, a researcher at the University of Sheffield in England, told Space.com in 2010. "Being a little over a million years old, the most extreme star R136a1 is already 'middle-aged' and has undergone an intense weight loss program."

Although R136a1 is the most massive known star, it is not the largest, since it only stretches about 30 times the radius of our sun. The largest known star is UY Scuti, a hypergiant with a radius somewhere around 1,700 times larger than the sun. Its mass, however, is only 30 times that of our nearest star.

If R136a1 swapped places with the sun, it would outshine our closest star as much as the sun currently outshines the moon. Its powerful radiation would have serious consequences for Earth.

"Its high mass would reduce the length of the Earth's year to three weeks, and it would bathe the Earth in incredibly intense ultraviolet radiation, rendering life on our planet impossible," said Raphael Hirschi, a research team member from Keele University in England.

R136a1 is a Wolf-Rayet star, a rare class of massive stars with prominent signs of ionized helium and carbon or nitrogen. While stars like the sun are made up predominantly of hydrogen and helium, Wolf-Rayet stars carry high amounts of other heavy elements.

Massive stars like R136a1 can have profound effects on their environment. Their high radiation pressures are thought to drive powerful stellar winds. The winds can distribute about 10 solar masses of material per million years at speeds of up to 1,864 miles (3,000 kilometers) per second.

Wolf-Rayet stars have lives far shorter than the roughly 10-billion-year lifetime of the sun, only about 5 million years. Scientists know of just over 200 Wolf-Rayet stars in the galaxy, but the Milky Way is estimated to contain as many as 2,000 of them, most of them hidden by dust. Roughly half of Wolf-Rayet stars are thought to have companions, either another massive star, a black hole or a neutron star.

Massive stars explode as supernovae that can seed their galaxies with heavy elements. While the universe started out filled with hydrogen and helium, stars are the factories that churn those light elements into almost every other element. When massive stars die an explosive death, they blow that material off, where it is gathered by other stars and formed into planets.

Massive stars are also responsible for neutron stars. After a Wolf-Rayet star explodes, it can leave behind a dense neutron star core. Collisions between neutron stars are thought to be one source of gravitational waves.

R136a1 is the most massive known star in the universe, but it is far from unique. A 2018 study of the Tarantula Nebula, also called 30 Doradus or 30 Dor, revealed that R136a1 is not alone; the nebula hosts several other stars with the greatest masses yet detected. While hunting for stars more than 30 solar masses in size, researchers found a wealth of much larger stars.

"Once we realized that 30 Dor hosts many more massive stars than previously thought, we were baffled and thought that we did something wrong," Fabien Schneider, an astronomer at the University of Oxford in England, told Space.com. "I would say this was to some extent a chance finding while we were aiming at other questions."

Schneider and his colleagues used the European Southern Observatory's Very Large Telescope in Chile to analyze the masses and ages of about 800 massive stars in the Tarantula Nebula. They found about 30 percent more stars with masses more than 30 times that of the sun than they expected, and about 70 percent more than expected above 60 solar masses.

Some of the other most massive stars include:

All of these stars lie in the Tarantula Nebula in the Large Magellanic Cloud.

R136a1 continues to hold the record since its discovery, and may remain at the top for some time.

"Owing to the rarity of these monsters, I think it is unlikely that this new record will be broken any time soon," Crowther said.

The most massive star in the Milky Way

Most of the most massive stars known to date lie in the Large Magellanic Cloud, a satellite galaxy to the Milky Way. However, the Milky Way has its own contenders. The star HD 15558-A weighs in at 152 solar masses. It is an O-type giant star with a smaller O-type companion star. Its large mass compared to its other stellar parameters have led some researchers to speculate that it may in fact be a double star, making the entire collection a triple star system.

The enormous star orbits the galaxy in its Perseus Arm in the open cluster IC 1805, which lies in the constellation of Cassiopeia.