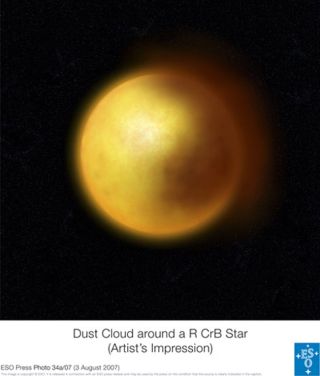 The recent detection of dusty clouds near a supergiant star provides the strongest direct evidence yet of why certain stars have mysterious periods of dimness.

A team of astronomers led by Patrick de Laverny of the Observatoire de la Cote d'Azur in France has observed a massive cloud of dust particles 30 astronomical units (AU) away from the star RY Sagittarii. (1 AU is the distance from the Earth to the Sun).

It is the closest dusty puff ever detected around a so-called R Coronae Borealis (R Cr B) star.

R Coronae Borealis stars are supergiants (more than 50 times the size of our sun) that exhibit erratic periods during which their brightness shrinks by a factor of 1,000 in just a few weeks, only to return to normal levels much more slowly. First observed in 1795, R Cr B stars have befuddled astronomers for ages.

The decades-old "Dust Puff Theory" holds that R Cr B stars sporadically eject matter, and that this matter can form carbon dust at a certain distance away, where the temperature is cool enough.

If the carbon cloud meanders into our line-of-sight, the star is eclipsed and visible light waves are blocked. Then, slowly, the force of light particles pushes the darkening shroud away.

Some 6,000 light years from Earth, RY Sagittarii is the brightest R Cr B-type variable star in the Southern hemisphere and a good source for evidence supporting the Dust Puff Theory.

In 2004, de Laverny's team established the existence of clouds several hundred radii from RY Sagittarii. They then focused on exploring closer regions, nearer to where the cloud might have formed.

Their latest observations, made with ESO's Very Large Telescope Interferometer, achieved this aim, and in the May 2007 issue of the journal Astronomy and Astrophysics, the astronomers reported the discovery of a cloud 100 stellar radii from the star's center, or 30 AU.

However, the observed cloud is probably already six months old and far from its place of origin deeper within the stellar envelope. Further observations are necessary to determine which of several variations of the Dust Puff Theory explains the location of cloud formation.

"Two hundred years after the discovery of the variable nature of R Cr B, many aspects of the R Cr B phenomenon remain mysterious," de Laverny said. The team will monitor RY Sagittarii closely in the coming months, in the hopes of shedding more light on the mystery of dim stars.