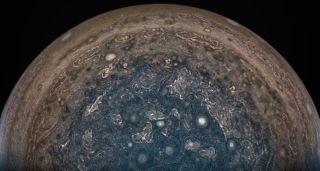 NASA’s Juno spacecraft soared directly over Jupiter’s south pole when JunoCam acquired this image on Feb. 2, 2017, from an altitude of about 62,800 miles (101,000 kilometers) above the cloud tops. This image was processed by citizen scientist John Landino. This enhanced color version highlights the bright high clouds and numerous meandering oval storms.
(Image: © NASA/JPL-Caltech/SwRI/MSSS/John Landino)

The solar system is more and more like a space oddity — Jupiter-like planets are more common around stars that also host giant-size versions of our planet, while our solar system possesses Jupiter but no such "super-Earth," a new study finds.

Super-Earths are planets larger than Earth that can reach up to 10 times this planet's mass. Previous research suggests that super-Earths are the most common type of planet.

To shed light on how super-Earths might form, scientists looked at stars that host super-Earths to see how many also possessed Jupiter-like worlds. Specifically, they focused on worlds one-half to 20 times Jupiter's mass at least as far away from their stars as Earth is from the sun — excluding hot Jupiters, which are Jupiter-size planets that orbit closer to their stars than Mercury does with the sun. They also compared the prevalence of Jupiter-like worlds around systems without super-Earths. [The Most Intriguing Alien Planet Discoveries of 2017]

Many prior studies have suggested that Jupiter has greatly influenced the evolution of the solar system. For example, as Jupiter orbited the newborn sun, it likely carved a gap in the protoplanetary disk of gas and dust that surrounded the infant star, limiting the amount of solid matter that could have spiraled from the outer solar system into the inner solar system to form the planets there. Jupiter's strong gravity may also have disrupted the orbits of nascent planets, potentially even hurling them into interstellar space.

"A number of great recent theoretical studies have suggested that Jupiter analogues might hinder super-Earth formation," study lead author Marta Bryan, an astrophysicist at the California Institute of Technology in Pasadena, told Space.com.

However, the researchers found that Jupiter-like planets are apparently not less common around stars hosting super-Earths than they are stars without super-Earths, but more common.

"Our solar system is odd for not hosting a super-Earth, since it's the most common type of planet, and now we find that it's also odd for not having a super-Earth despite having a Jupiter," Bryan said. "This suggests our own Jupiter may have influenced terrestrial planet formation in an atypical fashion."

A recent study suggested that our solar system may not host super-Earths because Jupiter migrated from about 6 astronomical units (AU) from the sun to 1.5 AU and then back out again, accompanied by Saturn leading a great deal of solid material to fall onto the sun, Bryan said. (One AU is the average distance between Earth and the sun — about 93 million miles, or 150 million km.)

The scientists detailed their findings in a study submitted June 22 to The Astronomical Journal.