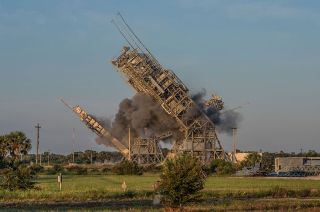 The last two launch towers to stand at Cape Canaveral since the dawn of the Space Age are no more.

"3... 2... 1... Fire in the hole!" announced Brig. Gen. Wayne Monteith, commander of the 45th Space Wing, before pushing a button to initiate a series of detonations. Seconds later, the towers fell over, kicking up a cloud of dust in their wake. [NASA's 10 Greatest Science Missions]

"It is part of history, which we are doing every single day out here on the range," said Monteith, per a video recorded by Florida Today, the local area's newspaper.

The 62-year-old mobile service towers supported 325 missile and rocket launches, including those of some of the United States' most notable satellites and robotic spacecraft.

The gantries, which were part of a two-pad complex sharing a single blockhouse, were originally erected in 1956 for the U.S. Air Force's Thor Intermediate Range Ballistic Missile (IRBM) research and development program. Pad 17B hosted its first Thor missile test in January 1957. Pad 17A entered service eight months later.

The first satellite to transmit pictures of Earth from orbit, Explorer 6, was launched on a Thor-Able rocket from Pad 17A in August 1959.

In the early 1960s, the complex underwent its first of several modifications in order to support larger launch vehicles.

Syncom 2 and 3, the world's first geosynchronous and geostationary satellites, respectively, were launched on Delta rockets from Pad 17A in 1963 and 1964.

From 1965, Complex 17 continued to support Delta launches under control by NASA. With the introduction of the Delta II expendable launch system in 1988, LC-17 was returned to Air Force supervision.

The Delta II opened a new chapter in space history for the towers at Complex 17, as they were raised even higher to support the taller rocket.

Beginning with its maiden flight from Pad 17A, the Delta II was used to launch 48 GPS (global positioning system) satellites. For NASA, the Delta II became a chariot into the solar system, with LC-17 serving as the opening to that pathway.

The space agency's first Mars rovers, Pathfinder and the twins Spirit and Opportunity, lifted off on Delta II rockets from Complex 17, as did the Mars Phoenix lander and the orbiters 2001 Mars Odyssey and Mars Global Surveyor.

NASA's Dawn and NEAR asteroid missions launched from 17B. Deep Impact, which slammed a probe into a comet's nucleus in 2005, began from the same site.

The Spitzer Space Telescope and Kepler space observatory both launched from Pad 17B. The first spacecraft to enter orbit around planet Mercury, MESSENGER, left Earth from 17B as well.

Ultimately, the decision to retire the Delta II meant an end for the gantry towers at Complex 17. (The last Delta II launch is scheduled to take place from Vandenberg Air Force Base in California in September.)

The last launch from Launch Complex 17A was a GPS satellite atop a Delta II in August 2009. The final launch from 17B came two years later in September 2011 with NASA's Gravity Recovery and Interior Laboratory, or GRAIL lunar probes.

Now, with the six-decade-old towers removed, Complex 17 will continue on as a test bed for commercial lunar landers. Cape Canaveral-based Moon Express has leased the site to build and test its moon-bound robotic spacecraft.

"This is about innovation as this launch complex is repurposed from Delta to Moon Express," said Monteith.

See video of the toppling of the towers at Cape Canaveral Air Force Station's Complex 17 at collectSPACE.