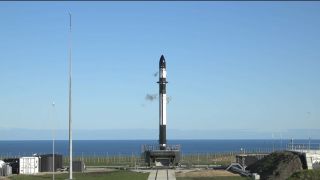 The private spaceflight company Rocket Lab postponed the first commercial launch of its Electron rocket from New Zealand on June 23, 2018 due to a tracking system issue.
(Image: © Rocket Lab)

Update for June 28: Rocket Lab announced today that "It's Business Time" will not launch during the planned 14-day launch window (June 22–July 6) due to an issue with the Electron rocket's motor controller. The company has not yet announced a new launch window at this time. An earlier launch attempt on June 26 was scrubbed when Rocket Lab discovered the the motor controller issue.

The private spaceflight company Rocket Lab called off the commercial launch debut of its Electron rocket early Saturday (June 23) due to a tracking system issue.

Rocket Lab initially aimed to launch the Electron rocket at 8:30 p.m. Friday EDT (02:30 p.m. Saturday local time/0030 GMT) from the company's seaside Launch Complex 1 on Māhia Peninsula in New Zealand. But cold temperatures delayed the launch at the opening its flight window, then a tracking dish problem cropped up. Rocket Lab was unable to solve that tracking system issue in time to launch during the mission's 4-hour launch window.

"Electron is healthy but we have not been able to resolve an issue with one of our down range tracking dishes in the Chatham Islands," Rocket Lab CEO Peter Beck wrote in a Twitter post, adding that it also affected the company's live webcast. "Ironically this is also required for a solid live stream."

Rocket Lab's next launch attempt will occur no earlier than 8:30 p.m. EDT Monday (June 25). It will be 12:30 p.m. on Tuesday , June 26, local time in New Zealand. The company will have the same 4-hour launch window, and can also try to launch Electron through July 6, if needed. The mission was originally scheduled to launch in mid-April, but was delayed by a technical issue.

"It's Business Time" will mark Rocket Lab's third flight for Electron, a booster designed to launch small satellite payloads into orbit. It follows two test missions. The first, called "This Is A Test," launched in May 2017 but failed to reach orbit. A second flight, called "Still Testing," successfully reached orbit earlier this year.

For this third flight, the Electron is carrying two ocean-tracking nanosatellites for the company Spire, a weather-tracking satellite for the company GeoOptics Inc., and the prototype satellite NABEO. The latter nanosatellite, which is also known as "Pride of Bavaria," was built by High Performance Space Structure Systems and will deploy a small dragsail in space to test its effectiveness for space junk removal.