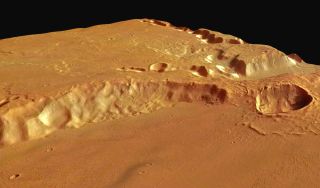 The Medusae Fossae formation, photographed here by the ESA’s Mars Express spacecraft, may be the single largest volcanic deposit in the solar system.
(Image: © ESA)

Today's Martian weather forecast calls for a hat, sunglasses and anything that will protect you from a planet-wide storm of hellish dust. But a few billion years ago, you might've been able to get by with just a pair of galoshes.

According to a new study published May 22 in the Journal of Geophysical Research: Planets, the entire surface of the Red Planet may have been covered in a single ocean about 3 billion years ago. The water would have been shallow — only about 4 inches (20 centimeters) deep, the study authors wrote. But Mars' "Waterworld" phase would have been just one consequence of a much larger phenomenon.

Beginning about 3.5 billion years ago and continuing for up to 500 million years after that, an outbreak of massive volcanic eruptions may have changed every aspect of the Martian geosphere, the authors wrote.

"[These eruptions] would have marked a pivotal point in the atmospheric, surface and interior evolution of Mars," lead study author and famed Mars-water-finder Lujendra Ojha, a planetary scientist at Johns Hopkins University in Maryland, said in a statement.

And, unfortunately for conspiracy enthusiasts, Mars' eruptive past may also mean the famed site of a suspected UFO crash landing is merely the result of ancient, world-shattering volcanoes. (How dull.) [Seeing Things on Mars: A History of Martian Illusions]

The mystery of the Medusae

For evidence of Mars' volcanic past, Ojha and fellow Johns Hopkins researcher Kevin Lewis looked to the Red Planet's most mysterious landmark: the sprawling collection of wind-sculpted hills and mesas known as the Medusae Fossae Formation (MFF).

"This is a massive deposit, not only on a Martian scale, but also in terms of the solar system," Ojha said.

This unusual region stretches along Mars' equator over an area about one-fifth the size of the United States, standing in stark contrast to the flat crust nearby. The rocks there are also significantly softer than regular Martian crust and have eroded into strange patterns over time, the researchers said.

Conspiracy theorists like pointing to Medusae Fossae as the site where an alien vehicle crashed. But scientists prefer simpler explanations for the anomalous terrain: Perhaps the rolling rocks are partially made of ice, or perhaps they are porous leftovers of past volcanic eruptions.

To get a clearer answer, Ojha and Lewis compared a slew of radar and gravity data taken during several previous Mars orbiter missions. From these combined measurements, they found that Medusae Fossae was far less dense than the rest of the Martian crust — about two-thirds as dense, to be exact.

According to Ojha, this ruled out the ice explanation right away, because ice is much less dense than rock. If Medusae Fossae were partly made of ice, density measurements would have to be far lower than they were.

However, Medusae Fossae's density closely matched that of a terrestrial rock called ignimbrite, which forms on Earth when fiery volcanic gases cool into solids. The stones are porous and less dense than solid crust — just as the stones of Medusae Fossae appeared to be. To the Johns Hopkins researchers, this was clear evidence that Medusae Fossae was the product of volcanic eruptions. [7 Most Mars-Like Places on Earth]

The biggest eruption in the solar system?

However, the researchers predicted that the Medusae Fossae once covered more than 2 million square miles (5 million square kilometers) of land. And a volcano doesn't simply create a deposit the size of the U.S. West Coast overnight.

To result in the formation of a region as large as Medusae Fossae, Mars' volcanoes would have to have erupted in enormous explosions, possibly some of the biggest eruptions our solar system has ever seen, the researchers said. What's more, these mammoth volcanic blasts would have to have occurred hundreds of times over a span of about 500 million years to produce a deposit as big as Medusae Fossae.

"The presence of a [volcanic] deposit of this scale on Mars has important implications for our understanding of the planet's volcanic history, its interior and volatile content," the researchers wrote in the paper.

If these eruptions happened, they would have changed the entire planet in myriad ways, Ojha added. Volcanic greenhouse gases would have poured into the sky; Mars' climate would have warmed severely; the composition of Martian soil and crust would have changed, and so much water would have flowed onto the planet's surface that Mars could've become one giant puddle.

Further research into this potentially pivotal moment of Martian history is needed. Luckily, as Mars continues to slowly evolve, humans may have a front-row seat.