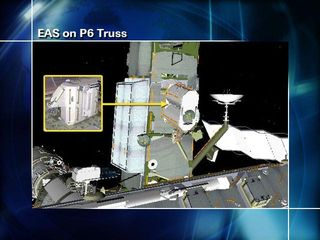 This NASA image depicts the location of the Early Ammonia Servicer, a refrigerator-sized device to be jettisoned during a July 23, 2007 spacewalk, on the exterior of the Port 6 truss of the International Space Station.
(Image: © NASA)

Thethree-man crew aboard the International Space Station (ISS) will do a littlehousekeeping during a spacewalk next week to make way for future expansion ofthe laboratory.

"Thisis the first time we've ever done a jettison quite like this on the spacestation," said Bob Dempsey, NASA's lead flight director for Expedition 15, adding that smaller jettisonshave been performed onpast ISS and Hubble Space Telescope missions.

During theupcoming spacewalk, Anderson will jettison a1,400-pound(635-kilograms) refrigerator-sized container of ammonia, or EarlyAmmonia Servicer (EAS), away from the station at a gentle pace of one mile per hour (1.6 kph).He'll also toss a 212-pound (96-kilogram) stanchion used to attach a camera to thespace laboratory toward the Earth.

Dempseyexplained that discarding the equipment during an extravehicular activity (EVA),rather than shipping it back to Earth via a NASA shuttle, was the best choicebecause of time and space constraints.

"It'snot a decision that's made lightly. Besides the fact that it might have someuse in the future, it provides space debris that could later impact the spacestation," Dempsey said. He noted that moving the equipment around will benecessary to make room for additions and repairs to the ISS during futureshuttle missions.

Once tossedfrom the space station, both objects will be tracked by NASA for almost a yearuntil they begin entering the atmosphere. The agency expects the stanchion toburn up completely, but think pieces of the ammonia tank may reach the Earth'ssurface.

"Wedon't know where it's going to land yet," Dempsey said, but added that itwill likely be over the ocean and shouldn't damage satellites or otherspacecraft in orbit.

In additionto tossing the unneeded equipment overboard, cosmonaut FyodorYurchikhin, Expedition 15's commander, will join Anderson on the spacewalk with cleaning andrepair duties. Flight engineer OlegKotov will control the robotic arm to shuttle the astronauts around outsideof the station.

When theEVA is complete, the space station will be boosted to a higher orbit to preparefor docking with Endeavour early next month, as well as to avoid dangerousencounters with the ejected objects.

"Weknow the crew's ready," said Daryl Schuck, NASA's lead EVA officer for Expedition 15,adding that Anderson andYurchikhin were trained on Earth for the jettisoning procedure. "We've gotconfidence in our approach to this and confidence in our crew."