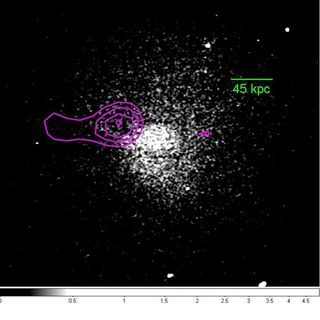 Chandra X-ray image of Abell 576 overlaid with outlines of gas blobs ejected in our direction. The system Abell 576 actually consists of two galaxy clusters that have been caught by XMM while in the process of merging into one another.
(Image: © University of Michigan (R. Dupke))

Two galaxy clusters have been spotted colliding at what was previously thought to be impossibly high speeds.

Astronomers estimate that the galaxy cluster collision known as Abell 576 involves two clusters—each containing hundreds of galaxies—crashing into one another at over 7 million miles per hour (3,300 km/s).

The finding, to be detailed in an upcoming issue of Astrophysical Journal, supports previous studies which suggest galaxy clusters can collide faster than previously thought.

“There is now a growing body of evidence that these high collision velocities are possible,” said study leader Renato Dupke of the University of Michigan.

Such collisions have been observed before, but the latest one is unusual in that the vantage point is from behind one of the clusters. Another well-known collision involving the Bullet Cluster takes place in the plane of the sky, so it appears to us as if the two clusters are crashing head-on.

The difference between these two vantage points is comparable to watching two cars ramming together on a movie screen versus being inside one of the cars.

Using the European Space Agency’s XMM-Newton and NASA’s Chandra orbiting X-ray observatories, researchers have spotted blobs of gas ejected from the cores of the clusters, but which will eventually fall back and merge together.

While individual galaxies crash into one another fairly frequently, astronomers estimate that only one in a thousand to one in a hundred galaxy clusters are involved in a collision. The amount of energy generated by a single, major cluster collision is thought to be second only to the Big Bang event that scientists think gave rise to the universe.

Identifying colliding systems is crucial for understanding the makeup and workings of the universe. Scientists have cited evidence from cluster collisions as some of the best available yet that dark matter and dark energy really do exist. Also, if unrecognized, collisions can lead to an underestimation of galaxy clusters by as much as 20 percent because of the large amounts of gas ejected during a crash.

Scientists rely on the mass of various galaxy clusters to estimate the cosmological parameters describing the expansion of the universe.

Astronomers expect that the two goliaths in Abell 576 will eventually settle into a single, gargantuan galaxy cluster.