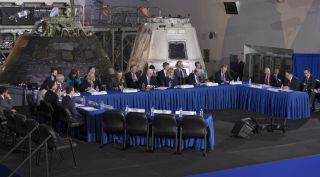 The key elements of Space Policy Directive 2 come from recommendations approved by the National Space Council at its Feb. 21 meeting.
(Image: © NASA/KSC)

PASADENA, Calif. — A new policy President Trump will sign May 24 will implement a series of regulatory reforms to support commercial space recommended by the National Space Council earlier this year.

Space Policy Directive (SPD) 2, to be signed by the president at the White House, includes several sections to carry out streamlining of launch and remote sensing regulations, creation of a "one-stop-shopping" office for commercial space, and reviews of radiofrequency and export control policy.

Scott Pace, executive secretary of the National Space Council, told reporters on a conference call May 24 that the policy is intended to carry out recommendations enacted by the council at its most recent public meeting Feb. 21. [In Photos: President Donald Trump and NASA]

"SPD-2 directs new policy with regards to commercial space regulations," he said. "The United States is the greatest spacefaring nation on the planet. President Trump recognizes space is crucial to our security, economy and international leadership."

One section of the policy addresses launch licensing, requiring the Secretary of Transportation, who oversees the Federal Aviation Administration, to "release a new regulatory system for managing launch and re-entry activity, targeting an industry that is undergoing incredible transformation with regulations that have failed to keep up," according to a White House fact sheet.

A second section deals with commercial remote-sensing regulatory reform. "The current regulatory system is woefully out of date and needs significant reform to ensure the United States remains the chosen jurisdiction for these high-tech companies," the fact sheet states.

A related section calls on the Secretary of Commerce to provide a plan to create a "one-stop shop" within his department "for administering and regulating commercial spaceflight activities." The Commerce Department had previously announced plans to combine the Commercial Remote Sensing Regulatory Affairs office with the Office of Space Commerce, giving the latter office that regulatory role for issues other than launch and communications.

The policy directs several agencies, including Commerce, the Office of Science and Technology Policy and the Federal Communications Committee, to develop a plan for "improving global competitiveness" of policies, regulation and other activities dealing with the use of radiofrequency spectrum for space activities.

A final section of the policy directs the National Space Council to review export control regulations regarding commercial spaceflight activities and provide recommendations within 180 days.

The policy closely follows the recommendations from the February meeting of the National Space Council. However, White House officials, speaking on background, said they don’t expect immediate changes as a result of the policy since many of the changes, like changes to regulations, will take months to implement through standard rulemaking processes.

Some changes, the officials acknowledge, will require legislation to enact, such as authority to license "non-traditional" commercial space activities. The House last month approved a bill, the American Space Commerce Free Enterprise Act, to carry out some of those changes, while the Senate Commerce Committee is drafting its own. The administration is in discussions with House and Senate members on needed legislation, the officials said.

The administration is separately considering a space-traffic management policy that Vice President Mike Pence announced at the 34th Space Symposium in Colorado Springs April 16. That policy would give the Commerce Department’s Office of Space Commerce new authority to provide space situational awareness services for civil and commercial operators.

"I would hope that our next step after this one will be a policy directive on space-traffic management," a White House official said on background, adding nothing is official yet regarding that proposed policy.