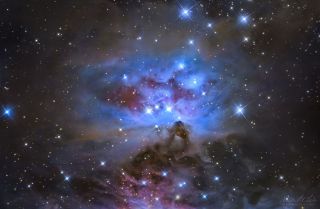 A colorful view of the Running Man Nebula (NGC 1977) captured by astrophotographer Miguel Claro from the Cumeada Observatory, headquarters of the Dark Sky Alqueva Reserve in Portugal.
(Image: © Miguel Claro)

Miguel Claro is a professional photographer, author and science communicator based in Lisbon, Portugal, who creates spectacular images of the night sky. As a European Southern Observatory photo ambassador, a member of The World At Night and the official astrophotographer of the Dark Sky Alqueva Reserve, he specializes in astronomical skyscapes that connect Earth and the night sky. Join Miguel here as he takes us through his photograph "A Running Man in Space."

The Running Man Nebula, also known as NGC 1977, vaguely resembles a colorful space ghost sprinting through the stars in the Orion constellation.

Located 1,600 light-years away from Earth, this cloud of interstellar dust and gas shares its cosmic neighborhood with two smaller nebulas, NGC 1973 and NGC 1975. Together, these three objects form a complex of blue reflection nebulas mixed with red emission nebulas divided by dark lanes of obscuring dust.

To see the Running Man, look carefully at the center of the image, where dark regions laced with faint red emission from hydrogen atoms loosely carve the shape of an "X" inside the blue cloud. That "X" forms the running man's arms and legs. The sprinter's head can be a little harder to discern; the faint, round feature is located in the blue region just above the runner's arms. [Spectacular Photos of Nebulas in Deep Space]

Found just half a degree north of the bright stellar nursery better known as the Orion Nebula (M42), the Running Man Nebula can be found just outside the bright and enormous Orion Molecular Cloud Complex. The Running Man Nebula glows with a vibrant blue color, because interstellar dust is reflecting the light from hot young stars. The brightest part of this cosmic cloud was discovered by William Herschel in 1786 and later officially designated NGC 1977.

To capture this image of the Running Man Nebula, I used a Nikon D810A DSLR astrophotography camera with a GSO 8-inch (20 centimeters) Ritchey-Chrétien astrograph, auto-guided with an EQ6 Pro equatorial mount. The camera was programmed to shoot with an ISO setting of 2000 and an exposure time of 300 seconds. The final composite combines 16 frames with a combined exposure time of 80 minutes. Image processing was completed with PixInsight 1.8 and Adobe Photoshop CC.

The image was taken from the Cumeada Observatory, headquarters of Dark Sky Alqueva Reserve in Reguengos de Monsaraz, Portugal.