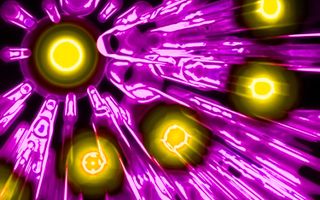 A groundbreaking quantum experiment recently confirmed the reality of "spooky action-at-a-distance" — the bizarre phenomenon that Einstein hated — in which linked particles seemingly communicate faster than the speed of light.

And all it took was 12 teams of physicists in 10 countries, more than 100,000 volunteer gamers and over 97 million data units — all of which were randomly generated by hand.

The volunteers operated from locations around the world, playing an online video game on Nov. 30, 2016, that produced millions of bits, or "binary digits" — the smallest unit of computer data.

Physicists then used those random bits in so-called Bell tests, designed to show that entangled particles, or particles whose states are mysteriously linked, can somehow transfer information faster than light can travel, and that these particles seem to "choose" their states at the moment they are measured. [What Is Quantum Mechanics?]

Their findings, recently reported in a new study, contradicted Einstein's description of a state known as "local realism," study co-author Morgan Mitchell, a professor of quantum optics at the Institute of Photonic Sciences in Barcelona, Spain, told Live Science in an email.

"We showed that Einstein’s world-view of local realism, in which things have properties whether or not you observe them, and no influence travels faster than light, cannot be true — at least one of those things must be false," Mitchell said.

This introduces the likelihood of two mind-bending scenarios: Either our observations of the world actually change it, or particles are communicating with each other in some manner that we can't see or influence.

"Or possibly both," Mitchell added.

Einstein's worldview — Is it true?

Since the 1970s, physicists have tested the plausibility of local realism by using experiments called Bell tests, first proposed in the 1960s by Irish physicist John Bell.

To conduct these Bell tests, physicists compare randomly chosen measurements, such as the polarization of two entangled particles, like photons, that exist in different locations. If one photon is polarized in one direction (say, up), the other will be going sideways only a certain percentage of the time.

These synched responses thereby contradict the notion of genuinely independent existence, a view that forms the foundation of the principle of local realism upon which the rules of classical mechanics are based. But, time after time, tests have shown that entangled particles do demonstrate correlated states that exceed the threshold; that the world is, indeed, spooky; and that Einstein was wrong. [The 18 Biggest Unsolved Mysteries in Physics]

However, Bell tests require that the choice of what to measure should be truly random. And that's hard to show, since unseen factors can influence researchers' selections, and even computers' random data generation isn't truly random. This creates a flaw in Bell tests known as the freedom-of-choice loophole — the possibility that "hidden variables" could influence the settings used in the experiments, the scientists reported. If the measurements aren't truly random, the Bell tests can't definitively rule out local realism.

Each of the laboratories performed different experiments, using different particles — single atoms, groups of atoms, photons and superconducting devices — and their results showed "strong disagreement with local realism" in a variety of tests, according to the study, which was published online today (May 9) in the journal Nature.

The experiments also demonstrated an intriguing similarity between humans and quantum particles, related to randomness and free will. If the Bell tests' human-influenced measurements were truly random — not influenced by the entangled particles themselves — then the behaviors of both humans and particles were random, Mitchell explained.