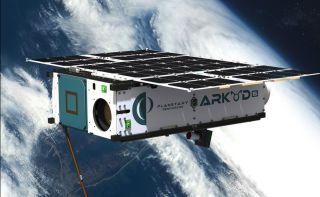 The Washington-based company's tiny Arkyd-6 satellite has completed all its mission goals in Earth orbit, just three months after lifting off atop an Indian rocket, Planetary Resources representatives said.

The cereal-box-size Arkyd-6 launched on Jan. 12 atop a Polar Satellite Launch Vehicle, along with several dozen other payloads. The cubesat set up shop in a sun-synchronous polar orbit, where it's been working to prove out technology required for Planetary Resources' next spacecraft, an asteroid prospector known as Arkyd-301.

The MWIR imager is particularly important to Arkyd-301 development and to the company's overall goals. The instrument can detect water, which is what Planetary Resources will be going after on asteroids, at least at first.

Water can be split into its constituent parts, hydrogen and oxygen, the chief components of rocket fuel. Asteroid mining should therefore lead to the construction and operation of off-Earth propellant depots, which could revolutionize spaceflight and exploration by allowing spaceships to top up their fuel tanks on the go, Planetary Resources representatives and other space-mining advocates have said.

If all goes according to plan, the company will launch multiple Arkyd-301 spacecraft atop a single rocket in 2020. Each spacecraft will cruise to a different asteroid, then assess the space rock's resource potential using onboard instruments such as the MWIR imager. The Arkyd-301s will also carry piggyback miniprobes, which will deploy from their motherships and burrow into their target asteroid to get even closer looks at the space rocks.