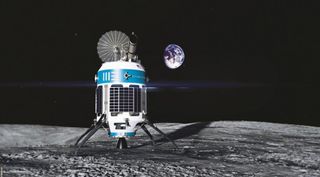 WASHINGTON — As congressional appropriators prepare to review NASA's latest budget request, a group from academia and industry are seeking support for a lunar exploration initiative included in the proposal.

In an April 10 letter to the chairmen and ranking members of the House and Senate appropriations subcommittees, 72 people from the research and business communities asked Congress for full funding of the Lunar Discovery and Exploration program in NASA's fiscal year 2019 budget proposal.

That program, located within NASA's Science Mission Directorate, seeks $218 million to support future exploration of the moon. That funding includes $18 million for continued operations of the Lunar Reconnaissance Orbiter spacecraft and $200 million for other lunar research activities, such as procuring flights on commercially developed lunar lander missions. [NASA's Exploration Mission 1: A Step-by-Step Return to the Moon in Pictures]

"The Moon is the cornerstone of planetary science," the letter states. "The new Lunar Exploration and Discovery program will give the United States the chance to, at long last, systematically prospect for resources on the Moon's surface, gather comprehensive new samples from all over the surface, explore lunar lava tubes, investigate magnetic anomalies, and address a long list of unanswered geophysical questions whose answers have deep implications for understanding formation of the Solar System and planetary science."

The letter also supports full funding of a separate program, called Advanced Cislunar and Surface Capabilities, that is part of the Advanced Exploration Systems division of NASA's exploration directorate. It seeks up to $130 million to support development of larger lunar landers, again in partnership with industry.

"The proposed lunar programs," the letter states, "place U.S.-led lunar science and exploration at the core of a new era of lunar exploration program. The requested funds are required to enable a successful U.S. mission to the Moon in 2019."

The letter's signatories range from graduate students to tenured professors and retired scientists, as well as executives with several companies with plans to either send missions to the moon or be otherwise involved in lunar exploration.

Among those who signed the letter is Apollo 17 astronaut and lunar scientist Harrison Schmitt. At a March 28 symposium on lunar exploration held here by the Universities Space Research Association, he backed the Trump administration's plans for a human return to the moon outlined in Space Policy Directive 1, signed by the president in December.

"Implementation of this policy for this country, and I think the free world, is geopolitically crucial," he said. "It's critical that it be accomplished."

Scientists back the exploration initiative, arguing that research performed during the decades since the end of the Apollo program have transformed our understanding of the moon and opened new lines of study that require new missions that can also enable human exploration and commercial ventures.

"This is not the old moon of Apollo," said Clive Neal, a professor at the University of Notre Dame and another person who signed the letter, at the symposium last month. "We've got a new view, and universities have been heavily involved in making that a reality."

The letter comes as appropriators on Capitol Hill prepare to devote attention to NASA's budget request. The commerce, justice and science subcommittee of the House Appropriations Committee will hold a hearing on the budget proposal April 12, with outgoing NASA Acting Administrator Robert Lightfoot scheduled to testify.

Its Senate counterpart has not yet scheduled a hearing on the NASA budget proposal. The Senate formally approved April 10 the assignment of Sen. Richard Shelby (R-Ala.) as the new chairman of the full appropriations committee. He succeeds Thad Cochran, a Mississippi Republican who retired from the Senate at the end of March.

Shelby is also taking over the defense subcommittee, giving up his chairmanship of the commerce, justice and science subcommittee. Sen. Jerry Moran (R-Kan.) will take over as chair of that subcommittee, with Sen. Jeanne Shaheen (D-N.H.) remaining as ranking member.