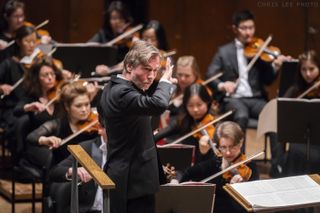 NEW YORK — The New York Philharmonic took a metaphysical journey into a black hole last week with the world premiere of "Metacosmos," a symphonic poem by the Icelandic composer Anna Thorvaldsdottir.

Inspired by the "balance between chaos and beauty" in the universe, Thorvaldsdottir sought to conjure the feeling of being sucked into a black hole and emerging in a strange new place, she said at the premiere performance of "Metacosmos" here at David Geffen Hall, home of the New York Philharmonic. The orchestra premiered the 12-minute piece in three performances on April 4-6.

The musical adventure of "Metacosmos" starts off with eerie, low-pitched drones and builds into a swarm of cosmic sound effects that might evoke the mental image of a flying saucer filled with little green men. By the time the brass, woodwinds and percussion joined the scene, I felt like I was cruising through space in a scene from a sci-fi movie. [Gallery: Black Holes of the Universe]

As the music drew the audience closer and closer to the metaphorical black hole, a swarming cacophony of sounds coming from the entire orchestra seemed to signal our impending doom at the black hole's event horizon: the point of no return. After a dizzying plunge into the black hole, the music turned peaceful yet strange, like the audience had entered a parallel universe that felt familiar but wasn't quite the same as where it all began.

Whereas a black hole pulls mass inward with its gravity, a white hole on the "other side" would take that same matter and spit it out into another universe with a strong repelling force that makes it impossible for anything to cross that object's version of the event horizon. Albert Einstein and his colleagues proposed white holes as a possible solution to the laws of general relativity, calling the associated wormholes "bridges" in space-time.

Both white holes and wormholes are purely mathematical constructs, and scientists have found no evidence that they exist. Likewise, scientists have yet to prove the existence of multiple universes, but many experts — including the late Stephen Hawking — have looked for evidence.

At the performance of "Metacosmos," Thorvaldsdottir said she was inspired by "this idea of being drawn in by some bigger force that is beyond your control" and "seeing beautiful things coming out of very chaotic elements."

While science currently cannot confirm that a person entering a black hole would find anything "beautiful" inside (or on the hypothetical "other side"), I can personally confirm that "Metacosmos" presents a pretty convincing soundtrack to an imaginary journey through a black hole.