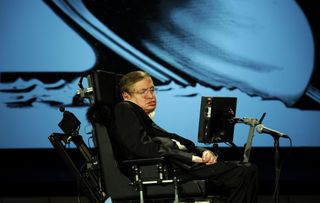 Stephen Hawking's final research paper could help astronomers find evidence that our universe is just one among many in a larger "multiverse," according to media reports.

The famed cosmologist, who died last week at the age of 76, is lead author of a study called "A Smooth Exit from Eternal Inflation?" which was originally submitted to an unnamed journal last July. On March 4 — just 10 days before Hawking's death — his co-author, Thomas Hertog, a professor of theoretical physics at KU Leuven University in Belgium, submitted a revised version of the manuscript for further review, according to British newspaper The Sunday Times.

The inflation referenced in the paper's title is the incredible expansion of space-time theorized to have occurred in the first few moments after the Big Bang, which created the universe. Many physicists believe that this dramatic ballooning wasn't limited to our neck of the cosmic woods but rather happened repeatedly, spawning multiple universes — perhaps an infinite number of them.

"A consequence of inflation is that there should be a multitude of universes, but we have never been able to measure this," Carlos Frenk, a professor of cosmology at Durham University in England who's not involved in the new study, told The Sunday Times.

"The intriguing idea in Hawking’s paper is that [the multiverse] left its imprint on the background radiation permeating our universe and we could measure it with a detector on a spaceship," Frenk added. "These ideas offer the breathtaking prospect of finding evidence for the existence of other universes. This would profoundly change our perception of our place in the cosmos."

Not everyone is so enthusiastic about the paper's potential. For example, Neil Turok, the director of the Perimeter Institute for Theoretical Physics in Canada, told The Sunday Times, "I remain puzzled as to why [Hawking] found this picture interesting."

However it's ultimately received, the manuscript — which you can read for free at the online preprint site arXiv.org — is a reminder that Hawking was a deep thinker committed to tackling some of the universe's biggest mysteries. He will be missed a great deal, by his colleagues and the general public alike.

You can read the full Sunday Times story here: https://www.thetimes.co.uk/article/stephen-hawkings-parting-shot-is-multi-cosmic-nbg0t6t9j