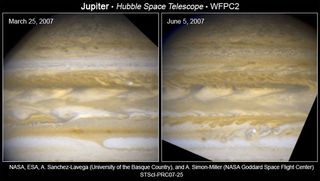 Clouds on Jupiter have been caught swapping places, changing their shapes and colors as lower clouds move up and higher clouds sink.

Jupiter is wrapped in cloudy strips of yellows, browns and whites, created by winds at various latitudes blowing in different directions. Propelled by speedy winds, the clouds whip around the planet at hundreds of miles per hour.

The images, released today, show a thin band of high-elevation clouds above Jupiter’s equator sinking through the atmosphere and turning brown. The clouds also morph from small squiggles into large wave-shaped features.

Below the equator, a giant tan-colored cloud shaped like an upside-down shark fin disappears, making way for numerous white swirls that take its place.

The transformation was caught by the space telescope’s Wide Field and Planetary Camera 2. Such global upheavals have been seen before, but not with Hubble’s sharp resolution.