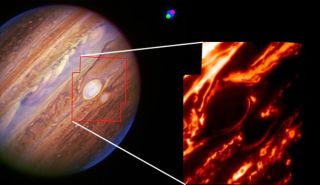 At left is a false-color composite near-infrared image of Jupiter and its moon Io, taken by the Keck II telescope. At right is a closeup of the two red spots through a 5-micron filter, which samples thermal radiation from deep in the cloud layer. Red Spot Jr. appears darker, either because its clouds are less dense or because the tops of the clouds are not as high as those of the larger spot.
(Image: © I. de Pater, M. Wong, A. Conrad, and C. Go)

The two most prominent storms on Jupiter's surface, the Great Red Spot and Red Spot Jr., both appear rust colored in visible light, but they are markedly different when viewed at infrared wavelengths, new observations show.

Recent images snapped by the Keck II telescope on Mauna Kea in Hawaii show that Red Spot Jr. is much darker than its larger counterpart under near-infrared light.

The new finding suggests that the tops of its storm clouds are either lower than those of the Great Red Spot or that its clouds are less dense and thus reflect less light, said lead astronomer Imke de Pater of the University of California, Berkeley.

The team thinks that with more space above its cloud tops, Red Spot Jr. might be absorbing more infrared light by molecules like methane in the atmosphere.

About the size of Earth, Red Spot Jr. is thought to have formed from the merger of three white spots sometime between 1998 and 2000. In 2005, it turned red like the Great Red Spot, a tempest that is twice its size and which scientists think has been swirling around Jupiter for at least 342 years.

Though the dynamics are different-Jupiter has no ocean and no solid surface-the storms are in some ways like giant hurricanes on Earth.

The two storms pass close to each other occasionally. Their latest encounter occurred earlier this month; the storms didn't collide, but Red Spot Jr. was squashed slightly in the eastward direction, which is the direction of the planet's rotation. The Great Red Spot rotates westward because alternating bands on the Jovian surface move in opposite direction.

Nobody knows for sure why the spots are red. One idea is that the storms' whirling winds-which can reach 400 mph  (about 640 kph)-dredge up chemicals deep within the planet's atmosphere, lofting them up to where they are broken down by the Sun's ultraviolet light and turn red.