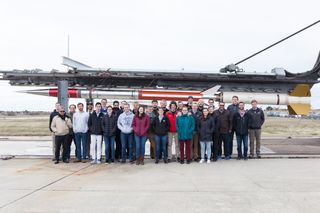 Undergraduate students watched their spaceflight projects soar into the sky over the weekend, thanks to a two-year NASA program that turned classroom lessons into hands-on experience.

On Sunday (March 25) at 6:51 a.m. EDT (1051 GMT), a NASA sounding rocket from the space agency's Wallops Flight Facility on Virginia's eastern coast carried the projects of student teams from four universities up to an altitude of 107 miles (172 kilometers). The educational endeavor was led by the NASA Undergraduate Student Instrument Project (USIP), whose mission is to spur interest in STEM education and help students become more familiar with science-related careers.

The launch of the two-stage Terrier Improved Malemute sounding rocket happened on March 25 after being postponed several times due to rough sea conditions. [Drill! Students Mine for Simulated Martian Ice]

After the flight was complete, the engineering projects descended by parachute into the Atlantic Ocean and were recovered so they could be returned to the students, NASA officials said in a statement.

The students hail from the Florida Institute of Technology, Utah State University, the University of Nebraska-Lincoln and the University of Kentucky. Managers at Wallops Flight Facility acted as the technical advisers to these undergraduate teams on behalf of NASA's Office of Education and Science Mission Directorate.

"USIP gave students the opportunity to experience working in a research and development environment," in addition to learning about "different aspects of taking an engineering project from conceptual design through fabrication and testing," Amy Price, a senior mechanical engineering student and team leader for the University of Nebraska USIP team, said in the NASA statement.

The student teams weren't made up of only engineering majors, Price added. "There are math, physics, finance and economics majors on the team," she said, as well as engineering students who focus on chemical and biological systems in their formal education.

By participating in the USIP, the students learned about logistics, and Price said she and her team "also honed [their] interpersonal and writing skills through design reviews, monthly status reports and required grant reporting."

Gabriel Myers, a senior mechanical engineering and physics major at the University of Kentucky, also commented on the USIP experience in the NASA statement. "Through cooperation with engineers at NASA Wallops and elsewhere, the group has been able to gain a degree of engineering intuition, aiding the students in drawing connections between their classes and applying that knowledge."

During the flight, students at the Florida Institute of Technology tested an insulation-repair material in a near-vacuum environment, while students at the University of Nebraska tested a retractable boom and solar blanket for applications on sounding rockets and small satellites. The University of Kentucky team deployed a small entry spacecraft during the flight to test a communications-and-thermal-protection system design, and students at Utah State University tested a thruster system with green propellant while looking for any harmful effects of plume contamination.