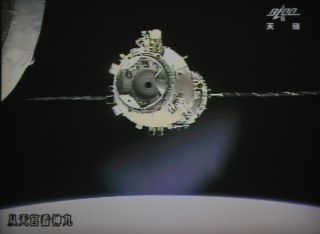 A photo of the giant screen at the Jiuquan space center shows the Shenzhou-9 spacecraft approaching Tiangong-1 module for the automatic docking on July 18, 2012.
(Image: © STR/AFP/Getty)

What do the Powerball jackpot and Tiangong-1, the Chinese space station hurtling toward Earth, have in common?

It's highly unlikely that either will physically impact your life in the slightest way — and the chances are even less for a space station collision than for a Powerball win.

In fact, the odds that any person will get hit by falling Tiangong-1 debris in the regions on Earth that are most at-risk for such a collision are about one million times smaller than the odds of winning the Powerball jackpot, according to the Aerospace Corporation, a nonprofit corporation in California that advises military, civil and commercial space operations. [Gallery: Tiangong-1, China's First Space Laboratory]

China launched Tiangong-1, the country's first space station, in September 2011, primarily so taikonauts (Chinese astronauts) could sharpen the skills — such as docking abilities — needed to build a planned space station in the 2020s, according to Space.com, a Live Science sister site.

Since then, Tiangong-1 has dutifully served its purpose, docking with three spacecraft: Shenzhou-8 in November 2011, Shenzhou-9 in June 2012 and Shenzhou-10 in June 2013, Space.com reported. But China lost contact with the 34-foot-long (10.3 meters) space station in March 2016, and now the 9.4-ton (8.5 metric tons) behemoth is falling back toward Earth.

Tiangong-1 is expected to collide with Earth around April 3, give or take a week, according to a prediction Aerospace Corporation made today (March 7). But the space station will likely burn up in the atmosphere, Aerospace said. When this happens, people may see a bright light hurtling across the sky, likely resembling this meteorite that disintegrated over Bolivia in 2016.

As it re-enters Earth's atmosphere, Tiangong-1 might break up into debris that could hit the ground or water, the Aerospace Corporation noted. If this happened, the debris would smash into the region of Earth that the station passes over, seen below in yellow (high probability), green (low probability) and blue (zero probability), Aerospace reported. The "zero probability" area constitutes about one-third of Earth's total surface area.

But even people living within the yellow bands shouldn't sweat it. As mentioned, they're much more likely to win the Powerball jackpot than they are to get hit by Tiangong-1 debris.

However, if any piece of Tiangong-1 were to crash into a person, it wouldn't be the first time that part of a spacecraft hit someone. In 1997, a small piece of a Delta II rocket struck Lottie Williams, a resident of Tulsa, Oklahoma, on the shoulder, according to NPR. Luckily, Williams wasn't injured, and she remains the only person on record to be hit with a piece of human-made space debris.

That's not to say space gear doesn't come crashing down to Earth. Over the past 50 years, more than 5,900 tons (5,400 metric tons) of space debris has survived re-entry into Earth's atmosphere, but no incidents — except for Williams' — have been reported, Aerospace Corporation said.

Meanwhile, Space.com has reported, the Chinese space agency has already launched Tiangong-2, whose name, like its predecessor's, means "heavenly palace" in Mandarin.