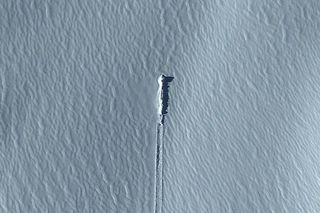 This block of ice in Antarctica, which is visible on Google Earth, is claimed by some as evidence of alien life.
(Image: © DigitalGlobe/Google)

A popular YouTube channel that peddles conspiracy theories is trying to convince viewers that photos of an avalanche on an island near Antarctica depict an alien spaceship crash site.

In a video posted to the channel SecureTeam10, a narrator claims that an image of South Georgia Island taken from Google Earth shows the remains of an extraterrestrial craft that slammed into the side of a mountain and skidded a long distance across the ice.

The photo does show a lot of disturbed ice on the side of a glacier near Mount Paget, a 9,629-foot-tall (2,935 meters) prominence on the British-controlled island far to the south of Argentina. A long trail extends away from the main disturbed area, leading to a white object that appears embedded in the snow on top of the glacier. [25 Strangest Sights on Google Earth]

Richard Waller, a senior lecturer in physical geography at Keele University in the United Kingdom, told The Daily Mail that the photo actually depicts an avalanche that cast one large block of ice skidding and rolling much farther than the rest of the collapsed snow, and that the white object is that block of ice. This scenario is also, frankly, pretty obvious to even a casual observer.

SecureTeam10's video on the subject has nonetheless been viewed nearly half a million times as of this writing. The channel's conspiratorial videos routinely garner hundreds of thousands of views.

In addition, the channel bears a "verification" check mark from YouTube. Google, on an oblique web page explaining the YouTube verification process (Google owns and operates YouTube), writes that a check mark indicates "that the channel belongs to an established creator or is the official channel of a brand, business or organization."

It's not clear precisely what criteria earned SecureTeam10 its YouTube verification. Live Science wrote to Google, requesting clarification on why SecureTeam10 was given such a check mark, but we did not receive a reply by the time this article was published.