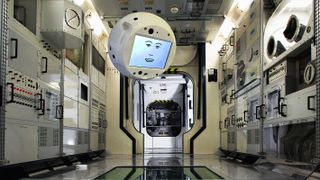 The crew on board the International Space Station (ISS) will soon welcome a new member — one that is 3D-printed from metal and plastic and is described by its creators as "a kind of flying brain."

It goes by the name CIMON, short for "Crew Interactive Mobile Companion." Built by the aerospace design company Airbus in collaboration with IBM, CIMON houses artificial intelligence (AI) in an autonomous, spherical body that would "float" in the space station's microgravity environment, with a screen that can display data readouts for astronauts — or present an image of a friendly face — as well as a voice shaped by IBM's AI technology.

The robot is tasked with supporting the ISS astronauts as a type of assistant, and free-flying CIMON would be the first AI-based mission on the ISS, Airbus representatives said in a statement. [From Reactive Robots to Sentient Machines: The 4 Types of AI]

As an "intelligent" machine, CIMON could help the ISS crew to solve problems during their routine work by processing and displaying diagnostic data. But its neural network — a computer system that works like the human brain — would enable it to go a step further and also engage with astronauts as a "colleague," according to the statement.

CIMON weighs about 11 lbs. (5 kilograms) and is already "training" with an astronaut — Alexander Gerst, who represented the European Space Agency (ESA) on the ISS from May to November 2014. Gerst will return to the ISS, bringing CIMON along, from June to October 2018, on ESA's Horizons mission.

Since 2016, a team of 50 technicians has been working to prepare the AI for its trip into space, feeding it data about the ISS and ensuring that the robot can orient itself and move freely. At the same time that CIMON was learning about the layout of the ISS, it was also becoming familiar with its astronaut colleague Gerst, through photos and voice samples.

Once CIMON is in space, astronauts and the AI will work together on a series of tasks that includes working with crystals, solving a Rubik's Cube and performing a medical experiment in which CIMON will serve as an interactive camera, Airbus representatives said in the statement.