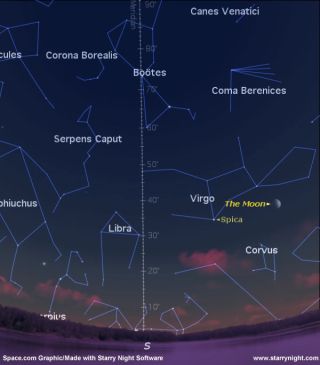 SKY MAP: The sky as seen at 10 PM local time on June 22 from midnorthern latitudes.

The springseason has just ended with summer officially arriving in the NorthernHemisphere on June 21. And one way to mark the transition from spring to summeris to find the star Spica, which now appears justpast the southern meridian at dusk.

Spica, the second brightest of the three stars that formthe so-called "Spring Triangle," is located within the large dimregion of the constellation of Virgo.

The moon,just past first quarter, will sit well off to the right of Spicaon the evening of the 23rd and will be well off to its lower left the followingnight.

Virgo isanother of those dull star patterns that owes its importance mainly to itslocation within the zodiac; she is supposed to represent Astraea, daughter ofZeus and Themis, the personification of the goddessof Justice who was the last of the deities to abandon the Earth at the end ofthe fabled Golden Age.

Spica in fact, is the only really conspicuously bright starin Virgo. A bluish-white star of great luminosity, Spicais so far away that its light requires 262 years to travel across the vast gulfof space that separates it from the Earth. Since light travels at 186,282 miles(299,791 kilometers) per second, it is obvious that Spicamust be far brighter than our Sun albeit tremendously farther away.

In fact,it's a brilliant "helium" type star, about 2,300 times more luminousthan our Sun.

Spica ranks as the 16th brightest star in the night sky andcan be regarded as a nearly perfect example of a star of the first magnitude. Aslisted in the 2007 Observer's Handbook of the RoyalAstronomical Society of Canada,its magnitude is given as 0.98, though the star actually varies slightly at irregular intervals from 0.97 to 1.04. It also has a tinyinvisible companion that was discovered while analyzing its light with aspectroscope back in the year 1890

The name Spica comes from the Latin "Spicum,"and is said to signify a spike or ear of wheat. It is derived from the ancientallegorical drawings of the goddess whose figure was somehow or other tracedaround the scattered stars by the imaginations of primitive stargazers. Formany parts of the classical world she was the "Wheat-Bearing Maiden."In old allegorical drawings, the goddess was shown holding several spears ofwheat in each hand and Spica is in one of the ears ofgrain hanging from her left hand, evidently representing the harvest time whichoccurred when the Sun was passing this bright star.

The onlyastronomy guide which outlines the stars of Virgo differently and hence "goesagainst the grain" (no pun intended) as to where Spicais located is in the famous guidebook "The Stars/A New Way to See Them" by the lateH.A. Rey (1898-1977). Reypictured Virgo lying on her back and stretched out along the ecliptic. As for Spica, Rey referred to it asVirgo's brightest jewel, but located ". . . on an unusual spot."

Henry M.Neely (1879-1963) was known as "The Dean of New York Stargazers" andlectured until he was well into his 80s at New York's Hayden Planetarium. Among thevarious objects that he would point out during a typical planetariumlecture, Spica was among his favorites. Back in the1950s, Neely would often train his electricarrow-pointer on Spica and remark that:

Consideringthat the light that left Spica back in 1776 still hasanother 31 years to reach us, it probably will cause those "baby-boomers"born during the 1950s (like myself) who gaze at Spicatonight to pause and reflect on old Neely's prophetic words!

Joe Rao serves as an instructor and guest lecturer at New York's Hayden Planetarium.He writes about astronomy for The New York Times and other publications, and heis also an on-camera meteorologist for News 12 Westchester, New York.