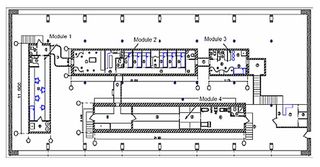 A schematic of the 2,150-square-foot facility where volunteers will carry out a simulated mission to Mars. "Module 1" is the medical module, "Module 2" is the living quarters, "Module 3" is the Mars landing module and "Module 4" is the storage module.
(Image: © ESA/Mars500)

Spaceenthusiasts interested in tagging along on a 520-day roundtrip journey toMars?a simulated one, that is?should apply now.

TheEuropean Space Agency is calling for volunteers to participate in ?Mars500,? anearly two-year-long simulation of a journey to the Red Planet, theorganization announced in a recent statement. The goal of the experiment is toprepare "for future human exploration missionsto Mars.?

?We arecurrently looking for volunteers to take part in a 520-day simulated Mars mission,?according to an ESA statement released Tuesday. ?To go to Mars is still a dreamand one of the last gigantic challenges.?

During thesimulation, men and women ?Martianauts,? as you might call them, will watchEarth disappear into the blackness of space as they munch on the same kinds of foodavailable on the International Space Station. ESA will even attempt to simulatethe 40-minute time delay for radio signals to travel from the craft to Earthand back, as the volunteers work and live in extremely isolated conditions.

Once thegroup "arrives," about half-way through the simulation, they willexplore the faux surface of Mars, the statement said. The entire experiment isexpected to be carried out in a 2,150-square-foot facility in Moscow?about thefloor space of a two-story house.

The ESAplans to ramp up to the long simulation with two 105-day studies starting inmid-2008, for which they also seek volunteers. The 520-day simulation wouldfollow in late 2008 or early 2009, according to the statement.

Fourvolunteers will be selected for each of the missions. An application isavailable at the ESA?s Mars500 Web site. The nine-page application askscandidates about fluency in Russian, the amount of beerand wine he or she regularly drinks and, perhaps most important, theirstrengths and weaknessesof personality.

What?s thebest way to increase your chances of making the cut?

?Theselection procedure is similar to that of ESA astronauts, although there willbe more emphasis on psychological factors and stress resistance than onphysical fitness,? according to the statement.

Though it'snot clear whether NASA's Mars plans will ever be carried out, the agency was directed byPresident Bush in 2004 to aim for putting humans on Mars after returningastronauts to the moon by 2020.