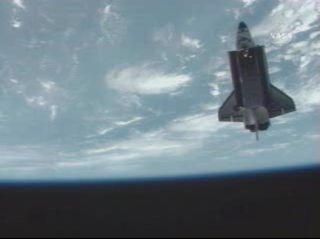 HOUSTON --The astronaut crew of NASA?s shuttle Atlantis is gearing up for a planned Thursdaylanding after a successful construction flight to the International SpaceStation (ISS).

Sturckowand his six STS-117 crewmates are concluding a 13-day mission to the ISS, whereoutfitted the orbital laboratory with new starboardsolar arrays and trusses, hauled in an older solar wing and swapped out a memberof the Expedition 15 crew.

Theastronauts undockedfrom the ISS Tuesday and flew around the station to take photographs of itsnew symmetrical shape.

The shuttlecrew is due to land Thursday at 1:54 p.m. EDT (1754 GMT) on a runway at NASA?s KennedySpace Center in Cape Canaveral, Florida, though forecasts of showers and cloudsthrough Friday could delay Atlantis? Earth return, Koerner said. The shuttlehas enough supplies to last through Sunday, though Saturday would be thedeadline for landing unless an unforeseen technical glitch occurred, she added.

?Get ussome good weather for Thursday if you can,? Sturckow told Mission Control lateTuesday. ?It doesn?t have to be good. It just has to be good enough.?

Today, thecrew will conduct a standard flight control systems check of Atlantis to makesure Atlantis is ready to once more fly though the Earth?s atmosphere. A testof the orbiter?s reaction control thrusters is also on tap.

Overnight,NASA image analysts were studying data from a standardsecond survey of the heat-resistant carbon composite panels lining Atlantis?wing edges and nose cap in order to give the STS-117 a final go for Thursday?splanned landing.

Theso-called late inspection, conducted by the STS-117 crew using the shuttle?srobotic arm and its sensor-tipped extension, scans for damage by orbital debrisor micrometeorites.

NASAengineers were also studying video of a white object that appeared to floataway from the ISS from the vantage point of a camera aboard Atlantis todetermine whether it actually came from the station or the orbiter itself,though mission managers said Tuesday that it was not a big concern.

Sturckowand his crew also relayed video to Mission Control of washer used to secureblankets in Atlantis? payload bay drifting from the orbiter after undocking.

Includedamong Atlantis? Earth-bound astronaut crew is U.S.spaceflyer Sunita Williams, who until recently served as the sole Americanmember of the space station?s Expedition 15 crew.

?She wasjust great fun to have on orbit,? ISS program manager Mike Suffredini, addingthat Williams made a point to invite Mission Control to access the station?sonboard video cameras often. ?You really got a sense that you were part of thecrew with her.?

Williamsjoined the station?s Expedition 14 crew in December 2006 during NASA?s last shuttlemission and stayed on for part of Expedition 15 in April. As of today,Williams has spent about 192 unbroken days in space and is setting a new recordfor the longest spaceflight by a female astronaut.

Williamsand the STS-117 crew will set up a recumbent seat - rather than an upright on -to ease her transition back to the tug of Earth?s gravity after six months inweightlessness. She said Tuesday that she?s taken a special effort in recent daysto exercise, with some sessions aimed at her heart.

?It?s oneof the muscles that gets a little bit weaker up here in space because itdoesn?t have to work so hard,? Williams said while narrating a daily STS-117video reel.

Williamshanded her Expedition 15 post over to fellow U.S. astronaut Clayton Anderson,who launched aboard Atlantis and is due to stay on through late October.

?It was my homefor six months and a pretty emotional event,? Williams said of watching the ISSdrop away Tuesday after undocking. ?But I?m happy to be coming back to Earth.?