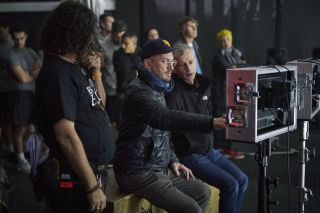 "One Strange Rock" is Aronofsky's television directorial debut. Hosted by Will Smith, the documentary is about Earth and the way so many seemingly different features of the planet actually work together in a symbiotic harmony to create the place we call home. Each episode focuses on a particular topic and utilizes interviews with eight astronauts (Hadfield leads two episodes) to help guide the narrative.

Best known for making movies like "Requiem for a Dream," "Black Swan" and, most recently, "Mother!" Aronofksy is a director who seems to enjoy making audiences squirm with discomfort (or watch with rapt attention, depending on your cinematic taste). Hadfield is a retired Canadian astronaut who, while living on the International Space Station, made a music video of himself singing David Bowie's classic ballad "Space Oddity." The video became a massive internet hit, and Hadfield has remained in the public eye as a strong promoter of science and exploration.

Perhaps what differentiates Hadfield and Aronofsky most is that Hadfield represents the very family-friendly picture of an astronaut, while much Aronofsky's previous work is far from appropriate for all ages. (But that's not true for everything the director has done, and "One Strange Rock" is family-friendly.) But the two men share many ideas about what "One Strange Rock" aims to accomplish. In January, they talked with a group of reporters about the show and what they hope audiences will get out of it.

Q: Darren, why did you want to take on a TV project, which you've never done before?

Darren Aronofsky: I think it was the fact that it was National Geographic, to start. I've been subscribing since I was a teenager, and I probably, at some point, wanted to be a NatGeo photographer. And I still get excited every month when my issue comes in. And actually, getting a [National Geographic magazine] cover for this show is definitely a bucket-list item for me.

And [the project] was also scary, which I always look for. Because to take all the different sciences, and try to blend them —

Chris Hadfield: [The show] has a lot of "-ologies."

Aronofsky: Yeah! How do you make something coherent [from all those]?

I think what they were looking for from me and [the show's co-executive producer, Ari Handel] was to create something emotional. And you know, I bet one of the big things that made me realize it was possible to do that was [Hadfield's] viral video, which was an incredibly emotional thing. So when we stumbled on the idea of telling it from the point of view of astronauts, that really sort of opened it up for us and gave us the courage.

By the way, how many hits did you get on that [video]?

Hadfield: I don't know. Lots. You know, I was down scuba diving on one of the little islands in the Caribbean, and this 17-year-old guy was the gear guy. And he's handing me my gear, and he looked at me and he said, "You did that song, didn't you?" He knows nothing about space programs, nothing about space exploration, but that got his attention. He knows the space station exists [because of that video]; he knows that this is going on in the world around him. And there's no other way to reach him, I don't think.

So, when something like ["One Strange Rock"] comes up, where it's so visually compelling, and then it's woven in with [astronaut] stories as well, it sort of serves the same purpose. It's definitely something I wanted to be a part of.

Aronofsky: I just go back to that "overview effect," which is something I wasn't even conscious of even when we said, "Let's do this with the astronauts." We just thought [featuring astronauts in the show] was an interesting perspective to have.

So I think that perspective was something that I was really immediately excited by and was like, "How do we emotionally sort of hint at it?" Because it's a near-impossible thing to experience until you experience it. I mean, I think, in many ways, it's hard for [the astronauts] to even describe what that experience is, right?

Hadfield: Yeah. We do our best, and we use every means we can.

Q: After doing this series, which really shows how many factors have to come together to create and support life, and Chris, after being in space, does it seem to you like life must be very rare in the universe or very common?

Aronofsky: It's been very vogue lately to say, "Oh, there's lots of life in the universe." And the big question is, why it hasn't reached us yet or why we haven't made contact with it. I mean, some people think we have [made contact], but either way … the way ["One Strange Rock"] portrays it is, it's amazing all these different things kind of, sort of stumbled together to make this grand reality of life happen.

Hadfield: One of the things the show does well, and some of the stuff we've very recently discovered, is just how old life is on Earth. Life is 4 billion years old on Earth. We've found fossils from 4 billion years ago on the shores of the Hudson Bay. And so the Earth was only half a billion years old when life had already formed. And Earth was a nasty place, and ["One Strange Rock"] shows just how hostile the environment was then. And life chugged along with extremely primitive, basic life-forms … until suddenly, randomly amazingly enough, complex life started erupting. And as far as we can tell, there has never been intelligent life here on Earth prior to where we are right now. So that might be the normal: that life is relatively common, but complex and intelligent life is as rare in the universe as it is on Earth.

You know, we talk about it on the space station all the time. "Do you think we're alone? How precious is this planet?"

But either way, if this is the only place that life exists, then we need to take really good care of it. And even if it's one of many [planets with life], it's still hard to get anywhere else with the technology we have, so we still need to take really good care of [Earth]. And the first step in taking care of something is recognizing its preciousness and its weaknesses, and understanding it better. And boy, I work really hard to tell people those things without them knowing I'm telling them. And this show does that. People should come away with a different decision process. It should change their behavior a little bit if the show does its job, and I think it does.

Q: Darren, will working on a show like this inspire your next narrative feature?

Aronofsky: You know, it's probably too soon to tell. But I think a lot of the themes in "One Strange Rock" are not that different from my last two films, which have strong environmental messages. I don't think an active environmental message is on the surface of "One Strange Rock," but of course it's something that's glorifying this planet, so there is a message there.

I think "Noah" and "Mother!" were very aggressively activist films. But it's just a different way of doing it. And I am happy to be involved with this project because it basically peels the orange a different way.

Q: Did you think of this series as essentially a single film, or even as 10 separate films?

Aronofsky: I think it's very different because it's not a narrative project. It's a very different art form. ["One Strange Rock"] is basically taking some of our storytelling skills and trying to get the emotions that we can normally get out of a narrative story but finding them in hard science, trying to corral that so audiences do have an emotional experience watching this.

So, it's not really comparable for me. This was about trying to unite 150 different locations — the most extreme places on the planet — unite them visually and then narratively, finding links that sort of build over the 10 hours so that, eventually, there's a big punch by the end where you have a real sense of how special this home we all live together in is.

Hadfield: It's been interesting watching you do that, because when I saw the initial rushes [for the show], it looked like video clips from 30 or 40 different places around the world. And now it doesn't. Now, it looks like they're all part of the same thing. And I don't know how you do that. I mean, I got my own skill set, but it sure isn't that. I don't know how you manage to visualize that in advance enough to get what you need and then how you edit it together. But that's what you guys have done, and it's just wonderful to see how you took that raw material and whittled it into what it is now. It tells a story really well.