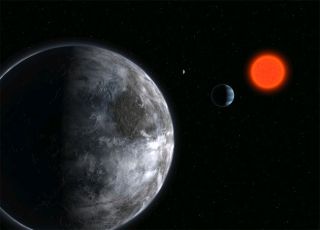 Scientistsearlier this year announced they had found a small, rocky planet located justfar enough from its star to sustain liquid water on its surface, and thuspossibly support life.

Turns outthe scientists might have picked the right star for hosting a habitable world,but got the planet wrong. The world known as Gliese581c is probably too hot to support liquid water or life, new computermodels suggest, but conditions on its neighbor, Gliese 581d, might be justright.

Thefindings are detailed in the May 25 issue of the journal Astronomy &Astrophysics.

Gliese581c, discovered in April by a team led by Stephane Udry of the GenevaObservatory in Switzerland, is about 50 percent bigger than Earth and aboutfive times more massive. It is located about 20.5 light-years away, and circlesa dim red dwarf star called Gliese 581.

Of the morethan 200 extrasolarplanets, or ?exoplanets,? discovered since 1995, Gliese 581c was the firstfound that resides within the habitablezone of its star, if only barely. The habitable, or ?Goldilocks? zone isthe region around a star where the temperature is neither too hot nor too cold,so water can exist on a planet?s surface in its liquid state. Water is a keyingredient for life as we know it.

But newsimulations of the climate on Gliese 581c created by Werner von Bloh of theInstitute for Climate Impact Research in Germany and his team suggest theplanet is no Earthly paradise, but rather a faraway Venus, where carbon dioxideand methane in the atmosphere create a runaway greenhouse effect that warms theplanet well above 212 degrees Fahrenheit (100 Celsius), boiling away liquidwater and with it any promise of life.

But thesame greenhouse effect that squashes prospects for life on Gliese 581c raisesthe same hope for another planet in the system, a world of eight Earth-massescalled Gliese 581d, which was also discovered by Udry?s team.

?Thisplanet is actually outside the habitable zone,? said Manfred Cuntz, anastronomer at the University of Texas at Arlington and a member of von Bloh?steam. ?It appears at first sight too cold. However, based on the greenhouseeffect, physical processes can occur which are heating up the planet to atemperature that allows for fluid water.?

And wherethis is fluid water, there is the chance of life as well. The researchersspeculate that ?at least some primitive forms of life? might exist on Gliese581d. There is no evidence to support that speculation, however.

DavidCharbonneau, an astronomer at the Harvard-Smithsonian Center for Astrophysics(CfA) who was not involved in the study, said the results from von Bloh's teamare "probably a sound calculation but we don't actually know if it'scorrect."

Gliese 581ddemonstrates the importance of taking a planet's atmospheric conditions intoaccount when considering its potential for habitability. The concept of ahabitable zone "is a very useful thing because it does inform us a greatdeal, and it explains a lot in the solar system. But it's not the wholestory," Charbonneau said.

JaymieMatthews, an astronomer at the University of British Columbia in Canada, doesn?t treat the new findings as conclusive, but finds them ?interesting as anillustration of how we can use remote exoplanetary environments as possibletest beds for climate models.?

The modelsmade by von Bloh?s team could be tested if scientists can measure thermalemissions and the reflectivity, or ?albedo,? of the planets, Matthews said.

Scientists?have done this already for HD 209458b, a hotJupiter, but we will need to do this for possibly ?Earthy? planets to trulyassess their habitability,? he added.

Matthewsown research, recently presented at the annual meeting of the CanadianAstronomical Society, suggests one reason Gliese 581 is such a promising starfor finding habitable planets is that it is similar to our own sun in that itis remarkably stable.

Matthewsand his team used a Canadian space telescope called MOST to monitor Gliese 581for six weeks. During that time, they observed very few instances of thepowerful solar flares common among reddwarf stars.

?If thestar showed significant variations in brightness during the weeks we monitoredit, that would at least complicate the thermal equilibrium of the planetsaround it,? Matthews explained.

Thestability of the light also suggests Gliese 581 is old and that is has beenaround for at least a few billion years.

?Youngstars, like young people, can have bad cases of acne (large starspots andactivity) and spin around,? Matthews said in an email interview. ?Older starslike the sun have relatively clear complexions and rotate rather sedately.?

?We know ittook about three and a half billion years for life on Earth to reach the levelof complexity that we call human,? Matthews said, ?so it?s more encouraging forthe prospects of complex life on any planet around Gliese 581 if it?s beenaround for at least as long.?