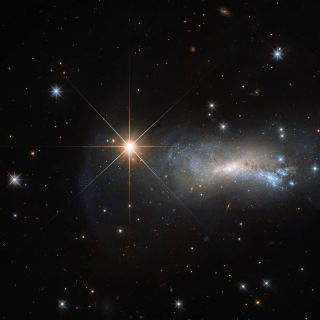 Ah, the life of an astrophysicist. The money. The parties. The paparazzi. No wonder so many young people flock to their nearest large research universities with stars in their eyes and dreams of Nobels in their hearts, buoyed by fantasies of solving the mystery of dark energy or cracking the enigma of quantum gravity.

It's true, sitting at the forefront of academic research is a unique, and sometimes thrilling, position. You are pushing the boundaries of human knowledge, and every experimental result, theoretical insight or recorded observation brings us closer to working out nature's secrets. And for a moment, scientific discovery is a very private experience. Until you share your results with your colleagues in the community and the public in the wider world, you are the only human on the planet to know that fact, that insight, that datum. [8 Baffling Astronomy Mysteries]

And once you release that information, the volume of humanity's understanding grows, most times by just a little, but sometimes by quite a lot. And at the end of your career, whether you end your journey as a young, freshly minted Ph.D. setting out into industry or a weathered and wizened emeritus professor, you can rest easy, knowing that academics and non-academics around the world are better off for your work.

Except, there are no jobs. At least, there are very few open faculty or research-lab positions for the people who want them (i.e., young Ph.D. holders). This isn't new; academic jobs have always been on the rare side. But with the growth of university populations in the past decades, there is a glut of bachelors from all majors, including astronomy and physics. For example, there were roughly twice as many physics bachelor degrees awarded in 2015 than in 1995. And the increased undergraduate population has opened up funds for departments to host more graduate students, who do the majority of the teaching assistantship work.

So, there are more Ph.D. grads created than ever before, but the same amount of — or fewer — long-term research jobs. Adding to the mix is the postdoctoral research position (often abbreviated as "postdoc"), a temporary job lasting two to five years in which you work to prove yourself as an independent researcher worthy of a faculty position.

The concept of a postdoc isn't a bad one: How far can you fly without your advisor as the wind beneath your wings? A postdoc also gives you some experience working with a different group other than your graduate institution, so the interconnected web of worldwide researchers grows more tightly knit.

You would think that with a lot of Ph.D. holders and not a lot of long-term jobs, there wouldn't be a lot of short-term postdoc positions. And that used to be the case; it was generally very tough and very competitive to get a postdoc, but if you did, you would most likely end up in a faculty position somewhere.

But in recent decades, with physical science research funding generally stalling or falling, it's easier for a department, lab, or center to make a case for a term-limited grant with a small set of objectives than ask for the big bucks necessary for a lifetime, open-ended faculty position. The result: more postdoc positions. So now the field is in a state where about half the newly-minted Ph.D.'s slide right into a postdoc position.

The result is the same: Most people with a Ph.D. in physics or astronomy won't end up in a job in that field. This isn't necessarily a bad thing, except that the harsh cutoff no longer comes when you're a fresh-faced, probably single 20-something, able to easily and nimbly pivot to another career. Now, the people getting nudged out of the system are in their 30s, haven't had a stable job for a decade, might be married, might want to start raising a family, and are generally making far less money than peers in their age and skill group.

And if you do get a faculty position, it's another five years before your tenure review finally cements your career. Some unscrupulous universities even intentionally hire two junior faculty on a track for the same long-term professorship, taking a "two scientists enter, one scientist leaves" approach to fostering top talent.

For a graduate student or postdoc, this career path is not that rewarding. You get built up assuming you're training for a career in academia, get a degree, then continue to be shunted from position to position. You get to do what you love, true, but with a clock always ticking in the background, reminding you that your time at the scientific forefront is probably nearing an end.

If that's the system we have, then that's the system we have, whether I think it's fair or not. Some people think that a brief time as an active researcher is enough, and more power to them. And a bachelor's or Ph.D. in physics or astronomy is a major asset for many kinds of jobs in industry, from finance to writing to consulting to Silicon Valley. Many science trainees are able to smoothly transition to a new life, making rewarding (both financially and mentally) lives for themselves. They also tend to make more money, which is nice.

Promising young students are more than welcome to take a chance at the academic wheel of fortune — assuming they know how the game is played. But we're doing a very bad job at educating undergraduate and graduate students about the prospects of an academic career and what they might have to sacrifice (stability, money, relationships) in order to attain a professorship, and what other noble (rather than Nobel) options might await them with their degrees.

If we want the astrophysics community to thrive and attract new generations of scientists with new insights and new abilities — and especially if we want to encourage youngsters to explore STEM careers — then we first have to be honest about the state of our field.

Learn more by listening to the episode "Why can't I be an astrophysicist?" on the "Ask a Spaceman" podcast, available on iTunes and on the web at http://www.askaspaceman.com. Thanks to @92Rufino and Vicki K. for the questions that led to this piece! Ask your own question on Twitter using #AskASpaceman or by following Paul @PaulMattSutter and facebook.com/PaulMattSutter.