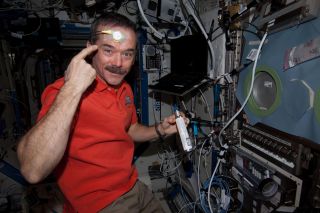 Astronauts in space suffer from persistently elevated body temperature, which can reach up to 104 degrees Fahrenheit (40 degrees Celsius) when they exercise, a new study has found.

The discovery raises concerns over the health effects of long-duration space missions, such as trips to Mars, as chronic fever could lead to many health problems and decreased cognitive performance on long journeys, the study's researchers said.

The data revealed that during the first two and a half months of a stay in space, the body's core temperature gradually rises until stabilizing at about 100.4 degrees F (38 degrees C) — 1.8 degrees F (1 degree C) above the healthy resting core-temperature that people have on Earth.

"This is potentially dangerous," Oliver Opatz, a researcher at the Center for Space Medicine Berlin at the Charité Medical University Berlin and co-author on the study, told Space.com. "The systems in the body — the blood, the enzymes and the transmitters — don't work as they do when the body temperature is normal. When you have fever, you don't feel well, [and] your brain doesn't work as normal."

Moreover, the risk of circulation problems, high blood pressure, and even heart attacks and overheating of the brain increases when the body's temperature is so high, Opatz added.

"Overheating of the brain can cause brain damage," said Opatz. "You don't want somebody who has to land a rocket on Mars to have an impaired brain function. You need to be sure the person is fit for the job."

Because the problem is exacerbated by physical activity, someone might suggest astronauts could just suspend their fitness regimen. However, Opatz said, that is not an option, as astronauts need to keep exercising daily to slow down the rate of muscle wastage that happens in weightlessness.

"Maybe you have to change the exercise protocols," Opatz said. "Maybe it's enough to measure the temperature and just stop when it gets too high. Maybe there is also a way to cool the astronauts under certain circumstances during training to avoid overheating."

The researchers said they are not certain why this increase in body temperature occurs in weightlessness.

There are multiple possible causes, Opatz said. First, the astronaut's circadian clock, which determines the 24-hour sleep-wake cycle, is out of whack in space, as day and night are not changing in the way they do on Earth. In people on Earth, the core body temperature fluctuates slightly based on this circadian rhythm.

Second, in a weightless environment, the distribution of blood within the human body changes, and more blood flows toward the head, which can also affect core body temperature, Opatz said. On top of that, heat does not dissipate from the body in weightlessness the way it would on Earth, as there is less airflow inside the space station.

"There is also a possibility that it could have to do with some immune factors in the blood that we know, from NASA studies, rise in weightlessness," said Opatz. "There could be an immune factor which leads to the rise of the temperature."

Opatz said the team plans to look into protocols to address the problem and further investigate the reasons behind this health-threatening space fever.

Dr. Paranjothy Karunaharan, head of the Aeromedical Centre at Heathrow Medical in the United Kingdom, and a member of the U.K. Space Medicine Association, said the transfer of heat between the body and its environment is significantly more challenging in weightless conditions. Karunaharan was not involved with the new study.

"In space, convection is reduced and sweat evaporates more slowly than on Earth, which explains why astronauts were found to overheat particularly quickly during exercise tests performed on the International Space Station," Karunaharan told Space.com. Designing ways to help these natural body-cooling mechanisms perform more efficiently could therefore help reduce the severity of the problem, he said.

Karunaharan also said that the possible involvement of immunological factors in the observed increased body temperature "is encouraging in setting up countermeasures, which can potentially be used to offset the core body temperature effects, which will involve further research."

Karunaharan agreed that the increase in core body temperature observed in the study would have significant effects on astronauts' health.

"The direct and immediate effect of a rise in core body temperature will be a rise in the basal metabolic rate, which will affect all systems of the body," he said. "The kind of symptoms likely to occur are headache, muscle cramps, dizziness, fainting and confusion, increased heart rate and respiratory rate, as well as digestive and sensory problems."

The new work was detailed Nov. 23 in the journal Scientific Reports.