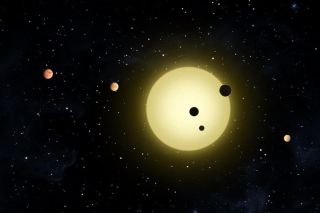 Our solar system may be an oddball in the universe. A new study using data from NASA's Kepler Space Telescope shows that in most cases, exoplanets orbiting the same star have similar sizes and regular spacing between their orbits.

By contrast, our own solar system has a range of planetary sizes and distances between neighbors. The smallest planet, Mercury, is about one-third the size of Earth — and the biggest planet, Jupiter, is roughly 11 times the diameter of Earth. There also are very different spacings between individual planets, particularly the inner planets.

This means our solar system may have formed differently than other solar systems did, the research team suggested, although more observations are needed to learn what the different mechanisms were. [The Most Intriguing Alien Planet Discoveries of 2017]

"The planets in a system tend to be the same size and regularly spaced, like peas in a pod. These patterns would not occur if the planet sizes or spacings were drawn at random," Lauren Weiss, the study's lead author and an astrophysicist at the University of Montreal, said in a statement.

The research team examined 355 stars that had a total of 909 planets, which periodically transit across their faces (as seen from Earth). The planets are between 1,000 and 4,000 light-years away from Earth.

After running a statistical analysis, the team found that a system with a small planet would tend to have other small planets nearby — and vice-versa, with big planets tending to have big neighbors. These extrasolar systems also had regular orbital spacing between the planets.

"The similar sizes and orbital spacing of planets have implications for how most planetary systems form," researchers said in the statement. "In classic planet-formation theory, planets form in the protoplanetary disk that surrounds a newly formed star. The planets might form in compact configurations with similar sizes and a regular orbital spacing, in a manner similar to the newly observed pattern in exoplanetary systems."

In our own solar system, however, the story is very different. The four terrestrial planets (Mercury, Venus, Earth and Mars) are very widely spaced apart. The team pointed to evidence from other research that Jupiter and Saturn may have disrupted the structure of the young solar system. While the statement did not specify how, several other research studies have examined the movements of these giant planets and their potential impact on the solar system.

Each of the exoplanets examined in the study was originally found by Kepler, which launched in 2009 and continues to send data today. But more-detailed information was obtained with the W.M. Keck Observatory in Hawaii; Weiss is a member of the California-Kepler Survey team there, which is examining the light signatures of thousands of planets discovered by Kepler.

Weiss said she plans a follow-up study at Keck to look for Jupiter-like planets in multiplanet systems. The aim is to better understand if the presence of a Jupiter-size planet would alter the position of other planets in the same system.

"Regardless of their outer populations, the similarity of planets in the inner regions of extrasolar systems requires an explanation," researchers said in the statement. "If the deciding factor for planet sizes can be identified, it might help determine which stars are likely to have terrestrial planets that are suitable for life."

The study was published Jan. 3 in The Astronomical Journal.