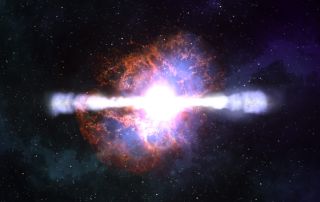 An illustration of the initial explosion in the death of a massive star.
(Image: © NASA/GSFC/Dana Bery)

Some dyingstars smolder into darkness while others quickly shed their coat of hot gases.But some go out with a bang, propelling their remains through the cosmos at morethan 99.9997 percent of the speed of light--the maximum speed limit in theuniverse.

?This isvery exciting,? said Stan Woosley, an University of California astronomer andastrophysicist who was not involved in the research. Woosley said the energyfound in the bursts ?strain the models? dictating how fastmatter can go.

Thefindings are detailed in the latest issue of the journal Astronomy &Astrophysics.

The burstslast only seconds to several minutes and their intense energy is at very short wavelengthswe can't see, so timing and an automated recording method is critical in orderto catch one.

EmilioMolinari, an astronomer with the Brera Astronomical Observatory in Italy and co-author of the study, said the observation was possible thanks to quick,automated observations of major galactic catastrophes.

?We can nowstudy in great detail the very first moments following these cosmiccatastrophes,? Molinari said.

In twoseparate events, on April 18 and June 7 of last year, NASA?s Swiftsatellite detected a bright gamma-ray burst and automatically notified thesmall REM telescope. Just 40 seconds after each explosion, the robotic observerswung around and aimed its lens at the event. Although the initial explosionswere invisible at first, the intense energy heated up nearby gas which could beseen in near-infrared light by the telescope.

By studyingthe changing brightness of both bursts, the astronomers measured how fast matter was careening away from the bursts. Astrophysicists usea special system to peg the speed of matter, called the Lorentz factor--thehigher the number, the closer to the speed oflight.

In the caseof both bursts, the Lorentz factor was 400--an unprecedented observation untilnow.

StefanoCovino, another co-author of the study and astronomer at the Brera AstronomicalObservatory, said the speed wasn?t the only impressing figure.

"Whilesingle particles ? can be accelerated to still larger velocities, the presentcases are the equivalent of about 200 times the mass of the Earth acquiringthis incredible speed,? Covino said.

"Youcertainly wouldn't like to be in the way," said Susanna Vergani, anotherteam member.

Now thatthe team has made the striking observations, they are trying to find some wayto explain them. "The next question is which kind of 'engine' canaccelerate matter to such enormous speeds," Covino said.