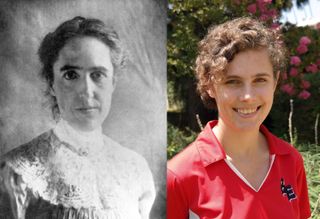 Henrietta Leavitt (left), came up with the Leavitt's Law, which used Cepheid variable stars to determine cosmic distances. Kate Hartman (right) showed that these same stars could be counted in an astronomy survey that will reveal hidden structures in the Milky way.
(Image: © Cynthia Hunt/Carnegie Institution for Science)

An astronomy technique developed in the early 20th century helped researchers measure distances to other galaxies and discover that the universe is expanding. Now, the stars that formed the basis of that century-old technique are part of a survey to map the history of the Milky Way galaxy.

In 1908, Henrietta Swan Leavitt — one of several women who worked as Harvard "computers" in the early 1900s, studying photographic plates of the night sky — discovered a relationship between the changes in the apparent brightness of "variable" stars and those stars' actual brightness, or absolute magnitude.

Because light dissipates in a predictable way as it travels through space, knowing a star's absolute magnitude made it possible to measure a star’s distance from Earth. More than 100 years later, astronomers continue to use this discovery, known as the Leavitt's law, in even more advanced ways. Now, astronomers with the Sloan Digital Sky Survey (SDSS) have included these stars in a survey of stars in the Milky Way that will help reveal the galaxy's structure and history. [Star That Changed the Universe Shines in Hubble Photo]

Leavitt's law came specifically from Leavitt's studies of Cepheid variable stars, which periodically vary in brightness (or pulse) in cycles that typically last a few days or weeks. The SDSS' Apache Point Galactic Evolution Experiment (APOGEE) is designed to map the position and composition of cool, old "red giant" stars found throughout the Milky Way galaxy. But the two telescopes now being used for the APOGEE survey can also detect Cepheid variables, which are typically younger than red giants but similar in temperature, according to the statement. Therefore, the APOGEE data allows astronomers to map both young stars and old giant stars in the same way, and, in turn, connect structures from the ancient galaxy to those that formed more recently, according to the statement.

Astronomy undergraduate student Kate Hartman set out to determine whether the variable nature of Cepheids would prevent them from being included in the study.

"It's been fascinating to work with such historically significant stars," Hartman, a student at Pomona College, said in the statement. Hartman announced the results of the study Tuesday (Jan. 9) at the American Astronomical Society (AAS) meeting in National Harbor, Maryland.

Hartman studied Cepheid variables over the course of a 10-week summer research project at Carnegie Observatories, during which she worked alongside her research adviser, Rachael Beaton, who is a Hubble and Carnegie-Princeton fellow now based at Princeton University.

Hartman looked at how the APOGEE telescopes measure the chemical composition of Cepheid variables, which can vary greatly in temperature, surface gravity and atmospheric properties during their brightness pulsation cycles. The chemical composition of a star can be measured via a method called spectroscopy, which indicates the presence or absence of chemical elements based on the appearance of specific wavelengths in the light from the star. The results of the study showed that it is possible to collect consistent measurements of the composition of Cepheid variables, regardless of when in their cycle APOGEE observed them, the researchers said in the statement.

"I had to look at multiple spectra from the same Cepheid variable and measure the amount of different elements in the star," Hartman said. "When we looked at a star's spectrum across its entire pulsation cycle, we found no significant differences in the results. That means that we're getting reliable results every time we look."

Researchers say this data is particularly useful, as it greatly expands the scope of stars that astronomers can include in the APOGEE survey. In fact, APOGEE now operates simultaneously with twin instruments on telescopes in both the Northern and Southern hemispheres, allowing astronomers to study the entire galaxy and its nearest neighbors (the Large and Small Magellanic Clouds), according to the statement.

"The survey will observe the most nearby and well-studied Cepheids with observations several times a month, will target Cepheids in the Large and Small Magellanic Cloud in January, and plans to eventually target all Cepheids in all parts of the sky we observe," Jen Sobeck, APOGEE's project manager from the University of Washington, said in the statement. "These observations are an important addition to the APOGEE map of the galaxy."

With these new tools, astronomers can continue to build on the work of astronomers like Leavitt, the researchers said.