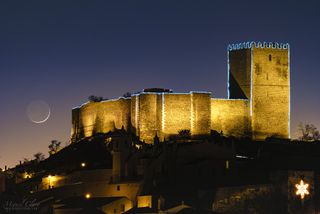 Earthshine illuminates the dark portion of the crescent moon in this photo taken at the Castle of Mértola in Portugal's Dark Sky Alqueva Reserve during the week before Christmas.
(Image: © Miguel Claro)

Miguel Claro is a Lisbon, Portugal-based professional photographer, author and science communicator who creates spectacular images of the night sky. As a European Southern Observatory photo ambassador, a member of the international astrophotography project The World At Night and the official astrophotographer of the Dark Sky Alqueva Reserve, he specializes in astronomical "skyscapes" that connect Earth and the night sky. Join him here as he takes us through his photograph "Lunar Christmas Earthshine Above Mértola Castle."

One day after the new moon disappeared in the night sky on Dec. 18, the face of the slender, crescent moon was only 2 percent illuminated by sunlight. But the other 98 percent of the moon's face escaped total darkness thanks to a phenomenon called lunar earthshine.

Even when direct sunlight lights up only a portion of the moon as seen from Earth, sunlight that reflects off our planet can illuminate the rest of the lunar surface, giving the unlit region a dim and subtle glow.

Leonardo da Vinci explained the phenomenon in the early 16th century when he realized that both Earth and the moon reflect sunlight at the same time. Light associated with earthshine is reflected from the Earth to the moon and back to Earth.

In this night-sky photo from Mértola Village in Portugal's Dark Sky Alqueva Reserve, a dark silhouette of the moon's round face is visible, along with the thin, bright sliver of the waxing crescent moon. In the foreground on a hilltop is the beautiful and well-preserved medieval castle, decorated with Christmas lights around the walls.