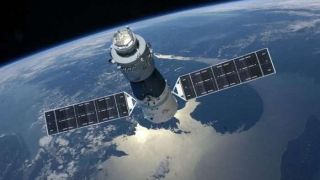 A 9-ton Chinese space lab will fall out of the sky soon — and if you predict exactly when, you can win some swag.

The Aerospace Corp.'s Center for Orbital and Reentry Debris Studies (CORDS) is sponsoring a guessing game about the death day of China's uncrewed Tiangong-1 spacecraft, which is currently forecast to plunge uncontrolled into Earth's atmosphere in mid-March, plus or minus two weeks.

If you pick the correct day — or if you're closer than anyone else — you'll win some Aerospace Corp. booty. To play, go to the CORDS site here. Note that 1the company. [Gallery: Tiangong 1, China's First Space Laboratory]

Tiangong-1 is the first space station built and launched by China. It was designed to be a crewed lab as well as an experiment/demonstration for a larger, multiple-module space station that the nation aims to have up and running by the mid-2020s.

Tiangong-1 launched in September 2011. In November of that year, China successfully docked an uncrewed Shenzhou spacecraft with the space lab. The nation then sent two piloted missions to visit Tiangong-1: Shenzhou 9 in June 2012 and Shenzhou 10 in June 2013.

On March 21, 2016, an official Chinese statement declared that telemetry services with Tiangong-1 had ceased.

Based on The Aerospace Corp.'s analysis of data from the U.S. military's Joint Space Operations Center (JSpOC), the last orbital adjustment for Tiangong-1 was made in December 2015.

It's unknown where on Earth Tiangong-1 will re-enter. But given the spacecraft's inclination, this object will come down somewhere between 43 degrees north latitude and 43 degrees south latitude.

Experts at the European Space Agency (ESA) will host an international campaign to monitor the re-entry of Tiangong-1, conducted by the Inter-Agency Space Debris Coordination Committee.

Because of the Chinese station's mass and hardy materials, there is a possibility some portions of Tiangong-1 will survive and reach the surface, ESA officials have said.

"Potentially, there may be a highly toxic and corrosive substance called hydrazine on board the spacecraft that could survive re-entry," CORDS researchers wrote on the organization's Tiangong-1 re-entry page. "For your safety, do not touch any debris you may find on the ground nor inhale vapors it may emit."

In a Dec. 8 communiqué from the Permanent Mission of China to the United Nations, China discussed Tiangong-1's upcoming re-entry.

"China attaches great importance to the re-entry of Tiangong-1. For this purpose, China has set up a special working group, made relevant emergency preparedness plans and been working closely with its follow-up tracking, monitoring, forecasting and relevant analyzing," the communiqué explains.

Until Nov. 26 of last year, Tiangong-1 had been orbiting at an average altitude of 184 miles (296.0 kilometers), circling Earth at an inclination of 42.65 degrees, the update explains.

"Currently, it has maintained its structural integrity with stabilized attitude control," the communiqué adds.

Tiangong-1 uses methylhydrazine and dinitrogen tetroxide as its engine fuel.

"Based on analysis, the remaining small amount of fuel will be burned and destroyed along with its structural components during the course of re-entry and will therefore not cause any damage on the ground," adds the communiqué. "China will continue to closely track and monitor the operation of Tiangong-1 and will regularly publish relevant information through the website of the China Manned Space Engineering Program (www.cmse.gov.cn) as well as other relevant media."