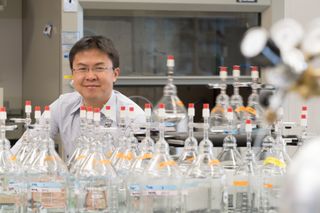 An enrichment of "heavy" nitrogen in Earth’s atmosphere has been found to represent the balance between biogeochemical and atmospheric production of nitrogen, a signal that one day could potentially be used to suggest the presence of biogeochemistry on other planets, too.

Nitrogen in the atmosphere is predominantly in the form of molecular nitrogen (N2), made of two atoms of nitrogen-14. There also exists a small quantity of the heavier nitrogen-15 isotope (an atom of nitrogen with an extra neutron) and, on rare occasions, two nitrogen-15 atoms can bond together to form a nitrogen molecule known as 15N15N. However, 15N15N shares a nearly identical atomic mass with nitric oxide — the difference is a mere two one-thousandths of the mass of a neutron — posing a challenge to efforts to measure its atmospheric abundance.

In a new paper published in Science Advances, a team led by Laurence Yeung, who is an assistant professor of Earth Science at Rice University, describe how they used the ultrahigh-resolution Panorama Mass Spectrometer in co-author Professor Edward Young’s lab at the University of California, Los Angeles, to distinguish between 15N15N and nitric oxide, resulting in an accurate measurement of the abundance of 15N15N in the atmosphere. Their findings surprised them: atmospheric 15N15N was enriched by a factor of 20 times greater than can be accounted for by biological processes on the surface. [10 Exoplanets That Could Host Alien Life]

Instead, the team determined that chemistry in the far reaches of the upper atmosphere near the orbit of the International Space Station, driven by incoming solar extreme-ultraviolet light, cosmic rays and particle collisions, produced the extra 15N15N.

Yeung is cautious about using the 15N15N signal as a potential biosignature in the atmospheres of exoplanets, since the signal is likely to vary depending on the distance from and the type of star the planet orbits (which affects the amount of ultraviolet light). It is also possible that non-biological nitrogen-producing chemistry could generate a signal on other planets.

"That said," he tells Astrobiology Magazine, "non-biological reactions of N2 occurring far from the upper atmosphere are typically inefficient – orders of magnitude slower than those catalyzed by biological systems. [So] finding a planetary tug-of-war on the ‘biological-like’ side would be quite encouraging."

The research was funded by the National Science Foundation divisions of Earth Sciences and Oceans Sciences.