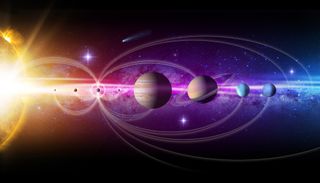 NASA will announce the finalists for its next robotic mission to explore the solar system on Dec. 20, 2017.
(Image: © NASA)

NASA will unveil the finalists for its next robotic mission to explore the solar system today (Dec. 20) and you can follow it live online.

"The mission, targeted to launch in the mid-2020s, would be the fourth in NASA's New Frontiers portfolio — a series of cost-capped missions led by a principal investigator," NASA officials said in a statement.

The space agency will announce the finalist concepts during a teleconference at 2 p.m. EST (1900 GMT). You can listen live here on Space.com, courtesy of NASA. The finalists were chosen from 12 proposals for missions aimed at exploring a wide range of targets in our solar system.

NASA gave scientists six themes to consider for their mission proposals. Those themes were:

Past New Frontiers missions include NASA's Juno probe now exploring Jupiter, the New Horizons mission to Pluto and the OSIRIS-REx asteroid sample-return mission currently on its way to the asteroid Bennu.