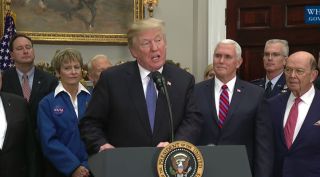 WASHINGTON — President Trump is unveiling a new national security strategy that focuses on ensuring U.S. economic prosperity, defending the homeland and posturing the nation to compete against rising technological powers. In the strategy, the administration coins the phrase “national security innovation base” to describe a key asset that the United States must protect.

The president will roll out the strategy Monday afternoon in a speech at the Ronald Reagan Building and International Trade Center here. According to a senior administration official, Trump is "excited" about the strategy because it "accurately reflects his priorities." [From Ike to Trump: Presidential Visions for Space Exploration]

There are four central themes in the strategy:

The "national security innovation" theme seeks to bring attention to the competitive pressures that threaten U.S. dominance in technology. "China is a competitor," the administration official said. "We take the view that we live in an ever-competitive world, and that the global balance of power has shifted in an unfavorable manner to American interests." The administration believes the nation needs to regain "strategic confidence to lead abroad."

The administration sees the U.S. innovation base coming under threat by "serious intellectual property theft" by China and other actors. "We need to protect our data, and ensure that CFIUS legislation is up to date," the official said, referring to the committee of government agencies that oversee foreign investments in U.S. companies.

Notably missing in the strategy is any mention of climate change as a security threat. The Pentagon for years has listed climate change as a national and global security challenge, but Trump chose to not include it in the strategy for the same reasons he withdrew the United States from the Paris climate accord. "It does not benefit American interests," the administration official said. "The president believes in America not having to apologize for its energy record."

Defense Secretary Jim Mattis told reporters Friday that he was pleased with the White House coordination process in the preparation of the strategy. "We have worked very closely with Dr. Nadia Schadlow, who kind of had the lead for it, Ms. Dina Powell and others," Mattis said.

Schadlow is a deputy assistant to the president and the National Security Council staffer in charge of writing the strategy. Powell is the outgoing deputy national security adviser.

"We brought the military factors into it," said Mattis. "It was very collaborative. We had an open invitation to be there, and we took full advantage of it, giving our inputs. … Within a month we'll have our [national defense strategy] out, and it’ll show that we’re integrated and aligned with it."