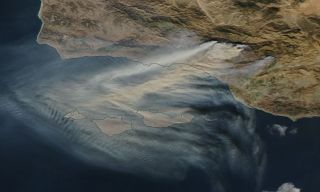 This natural-color image shows the copious amount of smoke from the Thomas Fire in California. It was taken with the with NASA's Moderate Resolution Imaging Spectroradiometer (MODIS).
(Image: © NASA)

A NASA satellite captured an image showing a thick curtain of brown smoke billowing from the Thomas Fire in Southern California yesterday (Dec. 14).

The image, taken by NASA's Aqua satellite, shows what is now California's longest-running red-flag fire since the state began keeping records in 1932. As of today (Dec. 15), the red-flag warning has been running for 12 days. The warning means that conditions are hot, dry and windy — the perfect recipe for wildfires. [Wildfires Blaze in Northern California (Photos)]

The Thomas Fire started near Thomas Aquinas College in Ventura County on the evening of Dec. 4, and has since burned 252,000 acres (102,000 hectares). It's only about 35 percent contained, according to Cal Fire. If the fire grows another 2,000 acres (809 hectares), it will be the third biggest fire in California history, according to NASA.

In just 11 days, the fire has destroyed nearly 1,000 structures and damaged another 218. It also led to the death of one firefighter ― apparatus engineer Cory Iverson, age 32, according to The Los Angeles Times. Thus far, more than 8,300 people, 1,012 fire engines, 32 helicopters and 78 dozers are helping to fight the fire, according to Cal Fire.

There aren't any signs of relief, either. There are high winds, with gusts up to 40 mph (64 km/h) in Santa Barbara, and 55 mph (88 km/h) in Ventura County. There is also low humidity continuing through Saturday evening (Dec. 16).

"These conditions cause extensive fire growth, not to mention poor air quality due to smoke and ash in the area," NASA said.