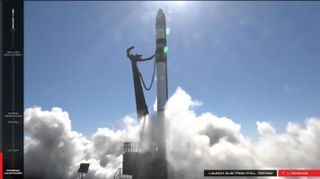 A Rocket Lab Electron rocket nearly took off from the company's launch facility in New Zealand on Dec. 11, but launch was aborted seconds before takeoff.
(Image: © Rocket Lab)

Update 12/13: Rocket Lab has once again delayed the launch of its Electron rocket due to weather. Company representatives say they will try again tomorrow (Thursday Dec. 14 in the U.S./Friday Dec. 15 in New Zealand).

At Rocket Lab's private launch facility in New Zealand, the countdown clock had nearly reached zero when a white puff of smoke erupted from the bottom of the Electron rocket — but then, the clock stopped, and the rocket failed to rise off the ground. The launch was abruptly halted at 10:50 p.m. EST on Dec. 11 (0350 GMT), which is 4:50 p.m. New Zealand Time on Dec. 12.

"After reviewing the telemetry and data, and time remaining in our launch window, the team has decided to wave-off for the rest of the day," Daniel Gillies, Rocket Lab's mission management and integration director, said during a live webcast on the company's website.

This is the second test launch of Rocket Lab's small-scale Electron rocket; the first test flight took place in May. This test — which the company has named "Still Testing" — has a 10-day launch window that opened on Dec. 7. Poor weather conditions have delayed a launch attempt until today.