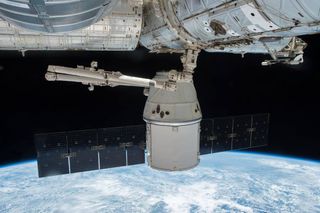 A SpaceX Dragon cargo capsule attached to the International Space Station. A Dragon capsule headed to the station in December 2017 will carry a Space Debris Sensor for tracking tiny particles that hit the station.
(Image: © NASA)

How many tiny bits of space debris are pummeling the International Space Station day after day? A new experiment headed into orbit this week will find out.

NASA's Space Debris Sensor is scheduled to launch aboard a SpaceX Dragon cargo capsule on Tuesday (Dec 12). The sensor is designed to gather data on micrometeoroids and pieces of space debris, each about the size of a sand grain — far too small to be tracked from the ground. The sensor will reveal how frequently these bits of material collide with the station, how fast they are moving when they hit and the direction they came from.

While a few grains of sand pelting a window might not pose a threat on Earth, even miniature bits of space debris can be hazardous in orbit. These objects typically move through space at speeds ranging from 6.2 to 8.6 miles per second (10 to 14 kilometers per second), according to Joseph Hamilton, principal investigator for the Space Debris Sensor at NASA. That means the particles carry enough energy to damage satellites or leave small cracks on space station windows. [Space Junk Clean Up: 7 Wild Ways to Destroy Orbital Debris]

"We pay close attention to the risk involved with debris," Hamilton said during a teleconference on Nov. 29.

The terms "space debris" and "space junk" refer to unused objects and material orbiting the Earth; this can include derelict satellites and much smaller bits of debris from in-space collisions, usually between satellites, or satellites and missiles. With very small objects, the effect of a collision will depend on many factors, such as the object's speed and density, Hamilton said, but these impacts can threaten astronaut safety even if they don't penetrate the station itself.

"Even small debris less than a millimeter [in diameter] can impact, say, a handrail and create a crater with sharp edges on it," Hamilton said. If an astronaut reaches for that handrail during a spacewalk, the sharp edge could damage his or her spacesuit.

The Space Debris Sensor is a flat square, about 3.3 feet on each side (1 meter square) and about 20 centimeters (8 inches) thick. It will be attached to the outside of the Columbus External Payload Facility and is intended to operate for at least two years, Hamilton said. It will help researchers build models used to anticipate how frequently a satellite or space station will be hammered by tiny bits of material, he said.

The instrument consists of three layers; the first two are soft so objects can penetrate them. By measuring the time it takes for the object to pass from the first layer to the second layer, the instrument can determine the object's speed, Hamilton said during the teleconference.

The layers are made of a material that can carry an electrical current, so a disruption to the current reveals that an object has passed through the material. That information can then be sent to the ground in real time. The third, sturdier layer will stop the object and measure the energy in the collision.

In total, the sensor will be able to tell scientists the size, density and velocity of an impacting object. The instrument will also reveal if the object was a micrometeoroid coming from space or a piece of space debris orbiting the planet, as well as if the object was in a circular or elliptical orbit.

While Hamilton said "dust detectors" have flown in space before to study small pieces of space debris, this is the first instrument "that combines all these types of techniques to try to get this kind of information."